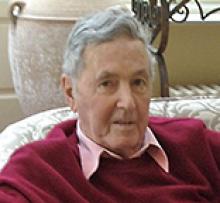 
Jack Willett died on June 11, 2020, in Jupiter, Florida where he had a winter home. He also had a home in Tunbridge Wells, Kent, England (The Hollonds) which he loved.
He was born in 1930 here in Winnipeg to Mary-Jo Willett and Edgar (Ed) Willett. He was the youngest of three and brother to Pat (Armand) and Lyn (Bill). His early passion was hockey and he loved playing goalie. During that time, he met F. Ross Johnson (affectionately known as Uncle Ross to us) and that friendship lasted a lifetime. As boys, Jack and Ross ran a Winnipeg Tribune paper route in the Dorchester/Lilac area and the sole purpose of it was to finance their many trips to the Salisbury House for Double Cheese Nips. In later years when they returned to The Peg, as they often did, the first stop was always at a Sal's for their favourite burger.
Jack graduated from Kelvin High School and in 1948 went on to the University of Manitoba. At the U of M, he studied business, but his real love was basketball (1950 to 1953) and he was affectionately known as "Jack the Whippet" because of his height and his speed. He tells a story of how they played against the Harlem Globetrotters, but it is difficult to verify the accuracy of his fond memory.
Jack married Jean and left Winnipeg after graduation to work for Proctor & Gamble in Toronto. His children, Steve (Assoudeh), Scott (Julie), and I, Susan (Bill), were born there. We then moved to Switzerland where he studied at Imede Business School in Vevey and worked for Nestle. Always open to new adventures, he landed a job in England at Findus (Bird's Eye) followed by jobs at Bristol Myers (Clairol), Cadbury Schweppes (where the story goes that he met the Queen Mother) and Standard Brands, later known as Nabisco Brands Ltd.
My mother and father parted ways after 20 years and Dad met and married Stella. They had two sons that we have been happy to call our brothers, Dan (Gabriela) and Max.
Dad finally retired from Nabisco after the leveraged buyout and continued to do what he loved, which was to play golf and travel extensively.
Unfortunately, as his health declined, he was no longer able to travel the world, but his later years were spent happily at the Loxahatchee in the company of good friends, including Ross Johnson and Neil Wood (also a dear friend from the University of Manitoba).
Jack will also be missed by his grandchildren, John (Stephanie), Heather (Bryce), Jodi, Sean (Pari), Ashlie (Richard), Wells, Lake, Piers and Aurelia; and five great-grandchildren, Cadence, Sawyer, Brigham, Kieran and Roan. His niece Melinda (Richard) and nephews, Ross (Kim) and Jimmy were also an important part of our family.
To the ladies who cared so beautifully for him, Janet, Una, Claudia and Yvonne, we will never forget your kindness.
Due to the current pandemic and travel restrictions, a celebration of his life has been postponed. He would be okay with that. Jack was a man who liked to listen more than talk and was always most comfortable when the spotlight was not on him.
He will be sorely missed by his family and his many, many friends.