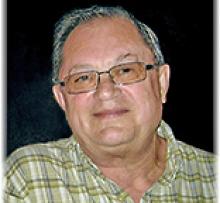 Robert (Bob) Senkiw of Dauphin, Manitoba, passed away on Friday, June 12, 2020, in Winnipeg, MB, at the age of 76 years, with family by his side.
Bob was born on October 20, 1943, in Dauphin, son of William (Bill) and Annie Senkiw (nee Osarchuk). He grew up on the family farm in the Valley River district (Sifton, MB).
After graduating from high school, Bob moved to Winnipeg to pursue his studies at the Manitoba Institute of Technology (now Red River College). Upon completing his training at Misericordia General Hospital, Bob graduated as a Registered Medical Laboratory Technologist specialising in microbiology in 1965. He continued to work at Misericordia where he met Dianne Dutchyshen, a fellow Medical Laboratory Technologist from Gilbert Plains, MB.
On May 9, 1970, Bob married Dianne in Dauphin. They resided in Winnipeg, and had two children, Jillian and Brad. In 1975, they moved to Dauphin and had their third child, Kelly. Dianne passed away on May 4, 1991, after a courageous battle with cancer.
On November 9, 1996, Bob married Lou Bouchard (nee Lindstrom) and his family expanded to include a stepson, Brett, and two stepdaughters, Leah and Chantal.
In 2002, Bob retired from the medical laboratory at the Dauphin General Hospital after 27 years. He took pride in his profession and enjoyed the warm camaraderie he shared with his colleagues.
Bob was very proud of his children and grandchildren and cherished every moment he spent with them. Bob spent many happy days at the family cabin at Singush Lake in Duck Mountain Provincial Park. He loved his annual winter trips south with Lou and the friendships he made with fellow travellers. Bob was a huge sports fan and could often be found cheering on the Winnipeg Blue Bombers, Winnipeg Jets and Toronto Blue Jays. Curling was another favourite sport that Bob played and watched. He enjoyed working with his hands and was a skilled gardener who generously shared his harvests. There was seldom a problem or project that would stump him.
Bob had a great sense of humour and was known for his witty observations and distinctive laugh. They will be sorely missed.
Bob was predeceased by Dianne in 1991, his father Bill in 1992, his mother Annie in 1999, his brother John in 2008, and sister-in-law Stella in 2000 of The Pas, MB.
He leaves to cherish his memory his loving family: wife Lou; daughter Jillian; son Brad (Malinda); daughter Kelly (Austin); and stepchildren, Brett (Yoshiko), Leah (Jaime, and their children, Lacey and Grady), and Chantal (Perry, and son Jacks). Also, brother-in-law Erling Lindstrom (Myrna), sister-in-law Joan Darling, brother-in-law Wayne Dutchyshen (Gaylene), nephew Justin, nieces, Kristin and Kylie and their families, and the children of John and Stella.
Donations in Bob's memory to the Heart & Stroke Foundation of Canada and CancerCare Manitoba would be appreciated.
A private service took place on July 7, 2020, at the Sneath-Strilchuk Family Care Centre, followed by the laying of ashes in the Dauphin Riverside Cemetery. A Celebration of Life will also be held in the future at Singush Lake.