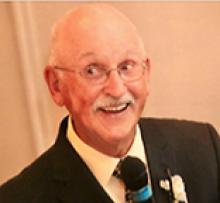 
Donald Lawrence Skinner, 88, died Sunday, July 5, 2020, peacefully at home.
Don was predeceased by his mother Martha Ernestine Skinner (Poirier); father Murray Clifford Skinner; his two brothers, Alfred and Gerald Skinner; and his wife Nola Joyce Skinner (Kyle) in 1996.
He leaves behind his beloved partner for the past 22 years, Gloria Beck; his sons, Murray Skinner (Laurel Beach) and Jeffrey Skinner; and daughters, Lori Rantala (Randy) and Kim Skinner (Laura Lee Billing). Don was blessed with five grandchildren, Kyle and Kaitlin Skinner (Ross Piaskoski), Barry Arklie, Alyssa and Jai Rantala; and two great- grandchildren, Mila and Roman Piaskoski. He also leaves behind many nieces and nephews and in-laws. All that knew him would agree that he was the nicest, kindest, and friendliest man you would ever meet.
In light of Covid-19, there will be no ceremony at this time.
In lieu of flowers, the Skinner family suggests a donation to Diabetes Canada.

A book of condolences can be signed at:
www.voyagefuneralhomes.com