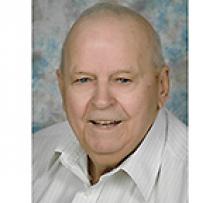 Robert Mollard passed peacefully on July 8, 2020, at Stonewall Hospital.
He is survived by stepson Larry (Betty), grandchildren, great-grandchildren and a great-great-grandchild.
Bob married Lenore December 28, 1963. Predeceased by wife Lenore (2011); parents, Happy and Queenie; brothers, Snookie, Reggie, Mutch, Fred, Roy, Kenny, and Hans; and sister Ali. Survived by sisters, Muriel and Joan; sisters-in-law, Lois, Ruth, and Lil, as well as numerous nieces and nephews.
Bob was 18 in 1945 when he joined the army. He finished his basic training and started advanced training. By then the war was over and he waited for a discharge.
Bob's grandfather was a founding member of Branch "52" in 1927. As of this year Bob would have put in 75 years as a member of the Stonewall Legion.
Bob started his career in 1948 with the Manitoba Hydro. He became a lineman which took him to a construction career with MTS in Kitimat, BC and Resolute Bay, NWT. He joined Magellan Aerobatics in 1963 and retired in 1989.
In his retirement years Lenore and Bobby enjoyed travelling to Nova Scotia, PEI, and Collingwood, ON. They enjoyed travelling in the motorhome to The Narrows, and Thief River Falls. They also enjoyed trips to Oak Hammock Marsh.
In lieu of flowers, if so desired, donations may be made to Salvation Army.
The family extends its deepest gratitude to Dr. Hicks and nursing staff of Stonewall Hospital for their compassion and support.
A private service will be held.