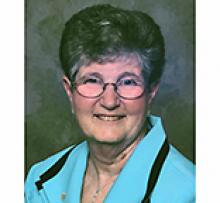 Margaret MacLennan (née German) passed away on June 26, 2020, in Winnipeg, MB, at the age of 79.
Margaret is survived by children, Elizabeth Martinuk (Tim), Bruce Plant; and former husband Jack Plant. Margaret's brothers, Harvey (Ruth) German and Gary German in Chatham, ON. Margaret leaves behind six grandchildren and numerous nieces and nephews.
Margaret was preceded in death by her parents, Henry and Gertrude German; siblings, Irene (John) Volkes, Ellen (Lloyd) Chapman and Audrey (Cliff) Jackson in Chatham, Ontario region. Margaret's second husband Charles (Bud) MacLennan also preceded her.
Margaret was born on November 1, 1940 in Chatham, ON to Henry and Gertrude German. Margaret married Jack Plant, her high school sweetheart in 1960. After moving around a lot with her husband's military postings Margaret finally settled down in Winnipeg, MB. Margaret enjoyed working for Bristol Aerospace as an Administrative assistant until her retirement. After retirement Margaret enjoyed volunteering at the Grace hospital in the "Muffin and Gift" shops. Margaret married her second husband Bud MacLennan in 2002 whom she met through the Rebekahs and Oddfellows.
Margaret was well involved in the church community where ever she lived. Margaret was a leader with the Brownies and Girl Guides. A dedicated member of the Rebekahs and Oddfellows, where she held the President and other offices. Margaret was a leader with Theta Rho a junior branch of the Rebekahs. Margaret was also a member of the International Training in Communications (ITC) where she was President.
We would like to thank the Healthcare Professionals at Health Sciences Centre, CancerCare Manitoba, WRHA palliative care, and WFPS responders for all of their help.
A funeral service will be held at 2:00 p.m. on Tuesday, July 14, 2020, at Chapel Lawn Funeral Home, 4000 Portage Avenue. Please call 204-885-9715 between 9:00 a.m. to 4:00 p.m. to RSVP.
In lieu of flowers, please send donations to Manitoba Memorial Eye Foundation, 4025 Roblin Blvd., Winnipeg, MB R3R 3V5.