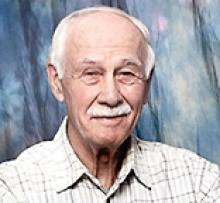 Tom passed away peacefully at the Salvation Army Golden West Lodge on Monday, July 6, 2020.
He is survived by his wife Wilma and her children, Allan and Andrea, Denise, Glen and Jodi, as well as Wilma's grandchildren. He is also survived by his sister Rose Penner, his sister-in-law Hilda Zacharias; his son Kelvin and Dawn and their family: Cameron and Lorrie, Tommy, Robbie, Jamie and Jon Wiebe. Clayton and Shawna, Connor, Hudson and Mya Wiebe all of Langenburg, SK. Carma and Richard, Brooklynn, Braeden and Acacia Bankert of Dauphin, MB. His daughter Karen Knight and her family: Jeremy, Jared, Zachary Knight and Tess Furtado of Winnipeg, MB. His son Daryl and Sharon and their family: Jon and Arlynn, Emsley and Everton Wiebe. Aaron and Michele Wiebe, and Cari and Keenan Bentham all of Winnipeg, MB. He is also survived by many nieces, nephews, and friends.
Thomas Wiebe, husband, Dad, Grandpa, and Great-Grandpa, was born February 12, 1927 in the Neuhoffnung district near Altona, Manitoba.
He made a major life decision in March, 1949, receiving Jesus as his Savior and following God for the rest of his days. He married Marie Zacharias on October 22, 1949, and settled in Winnipeg.
He spent many years as a dispatcher for Leamington Transport and Reimer Express Lines.
He was a self-educated handyman and mechanic, and a farmer at heart.
In December 2002 Tom married Wilma Doty. Together, they enjoyed family, attending church, going to special events and spending time at Winnipeg Beach. They also spent many hours volunteering at Golden West Lodge.
If friends so desire, donations may be made to The Bridge Church or to Golden West Lodge.

We have all been blessed to have
this kind, caring and loving man
in our lives for so long.

This obituary can also be viewed at
www.cropo.com.