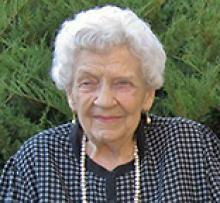 Unexpectedly on July 7, 2020, Edna Cameron passed away, at St. Boniface Hospital, at the age of 92.
Edna was born September 23, 1927 in Winnipeg to Bill and Pearl (Wallace) Woodward. She attended Daniel McIntyre Collegiate and then worked for the Federal Income Tax Department. Edna was a lifelong member of Broadway-First Baptist Church and that was where she met Bruce Cameron. They were members of the Baptist Young People's Union and attended many social functions, including dances at Grand Beach in the years after the Second World War.
Bruce and Edna were married June 10, 1950 at Broadway, just two months after the devastating flood in southern Manitoba. They built a house in the new area of River Heights in 1951. Bruce and Edna lived there until 1965 when they moved to Oak Street in North River Heights where they resided until Bruce was admitted to long-term care in 2014.
Edna engaged in a number of activities throughout her life. She sang soprano in the church choir for many decades, volunteered with Meals on Wheels, Agape Table and a Community Clothesline through Broadway. In later years, Bruce and Edna were members of the Gilbert and Sullivan Society of Winnipeg.
Edna leaves to mourn her passing: her son Craig (Donna) of Elora, Ontario, daughters, Susan (Norbert) Kaehler and Nancy Cameron of Winnipeg, and son Blair (Julianna) of Winnipeg as well as grandchildren, Joanna (Kerry) Gisler of Salt Lake City, Utah, Philip Kaehler of Winnipeg, Jonathan (Ruth) Boyd of Oakville, Ontario, Phillip (Stephanie) Boyd of Toronto, Ontario, Ashley and Matthew Cameron of Winnipeg; two great-grandsons; sisters-in-law, Vivian Cameron and Doris Woodward of Winnipeg; and brother-in-law Byron Elsey of Winnipeg as well as many nieces, nephews and close family friends.
She was predeceased by her parents in 1963 and 1968 respectively, brother Frank Woodward in 1977, sister Joan Elsey in 2014, husband Bruce in 2016 and granddaughter Anastasie Hacault in 2017.
At this time there are no definite memorial plans. Interment will happen at a later date in Shoal Lake Cemetery, Manitoba.