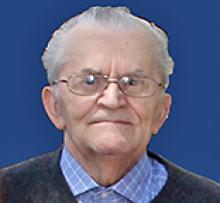 
Quickly and quietly, in the early hours of Monday, July 6, 2020, Erhard Meier passed into God's arms.
Born in a tiny Bavarian hamlet in 1935, the fourth of nine children, Erhard grew up on the family farm until his teen years, when he began an apprenticeship with a baker in a town 30 kilometres away. In 1954, with not much more than a suitcase, a passport and his baker's certificate, Erhard boarded a trans-Atlantic ship for Canada. He landed in St. John, New Brunswick and took the train to Winnipeg, where an older brother was waiting for him.
In Winnipeg, Erhard met Theresa Klinger, whose family belonged to a German Catholic parish in the city's North End. Their courtship blossomed and in January 1961 they were married at St. Joseph's Church.
Nothing was more dear to Erhard, or brought him more joy, than his family. Erhard and Theresa would raise six children, and over the years the family broadened to include 13 grandchildren. Erhard was extraordinarily proud of his family and took great delight in their achievements, big or small. He enjoyed family vacations and taking his children on trips. From a road trip to the Rockies in 1971, to vacations in California, Florida and the Caribbean, to trips to Europe and visits to his siblings in Germany, Erhard was game for adventure. Among the highlights were attending the World Cup final in Berlin in 2006 and a Euro championship game two years later in 2008.
Along with raising a large family, Erhard also built a prosperous business. Although his formal schooling ended when he completed Grade 8 and embarked on a baker's apprenticeship, Erhard didn't stop learning. Starting with his first job in Canada at a small bakery, and through his years as a bakery manager at various Dominion Stores, Erhard acquired the skills and know-how to successfully operate a commercial food production enterprise. When the opportunity arose in 1974 to buy a mid-sized bakery on Selkirk Avenue, Erhard seized the moment.
Erhard worked tirelessly at the Donut House, expanding the business year after year, decade after decade. It was hard work, and it meant long hours and personal sacrifices. He was proud of the products he made and the success of the bakery. It was something he shared with his son Russell, who worked with him as a partner for 35 years.
Erhard was also very proud of Theresa, whom he loved dearly. He would often tell his children how lucky we were to have her as our mother.
Erhard enjoyed the companionship of a succession of family dogs, especially his beloved "Jack," who dutifully put him to bed every night. He enjoyed socializing with his extended family and friends, lounging at his treasured cottage at Lake of the Woods, and watching Blue Bomber games. And soccer, of course. He was a fan of FC Bayern Munich and the German national team, and passionately followed the World Cup every four years.
In his later years, as Erhard slowed down physically and his hearing began to wane, he continued to find joy simply by being with his family. He would contentedly sit in a chair at family get-togethers, smiling and taking in the happy interactions of his children and grandchildren. And truthfully, that's all he wanted.
Erhard will forever be remembered and lovingly missed by his wife Theresa; his children, Randall (Genny), Russell (Suzy), Dean (Bea), Leanne (Shane), Janice (Chris) and Grant (Ayesha); and his grandchildren, Kennedy, Tom, Anton, Simon, Julian, Olivia, Claire, Siena, Lachlan, Ava, Sebastian, Damien and Isabel. Also left to mourn are brothers, Franz, Erwin (Gisela), Conrad (Ermalinda) and Joseph; sister Apollonia (Siegfried); sisters-in-law, Mary and Anne; many nieces and nephews; and numerous friends and acquaintances. Erhard was predeceased by his sister Theresia and brothers, Toni and Albert.
The family would like to thank Erhard's long-time doctor, Barry MacMillan, who provided special care and treatment for decades. They would also like to thank the first responders, the nurses and doctors in the St. Boniface Hospital Emergency team and ICMS unit, and Father Previl, the chaplain who provided spiritual care at the hospital.
Due to COVID-19, a funeral service is being held for immediate family on Tuesday, July 14, 2020 at 11:00 a.m. with Father Boguslaw Wardzinski officiating. Interment to follow at Assumption Cemetery.