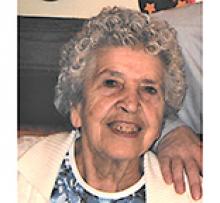 It is with heavy hearts that we announce the passing, on July 4, 2020, of Paula, our dear daughter, sister, wife, mother, oma and ur oma at St. Boniface Hospital.
One of nine children, Paula was born on September 24, 1928 to Wilhelm and Else Hauck in St. Ingbert, Saarland. There she met George, the love of her life and they married on August 16, 1947. After the birth of their two sons, and several years later, Paula and George decided to move to Canada to make a better life for their family. On October 22, 1956 their ship, the Arosa Star, arrived in Montreal and from there they proceeded by train to Winnipeg, their chosen home. Within a few years they were able to purchase their family home in St. Vital. It is there that they lived until recently when Paula became ill.
Paula was a hard worker, wonderful wife, mother, Oma and Ur Oma, good friend to many and Oma to all. She welcomed you into her home with open arms and food. Rarely was there a time when there was not a pot of soup on the stove or in the fridge. A wonderful baker, we all had our favourite and she made sure, up until last year, that she baked it for our birthday. Paula loved her yard, particularly her garden, which was specifically planted for her love of tomatoes. She ate at least one everyday right up until in hospital. She was feisty and with it until the end, still reading her newspaper everyday so she could keep up with current events. She will leave a huge hole in our hearts.
Paula is survived by her loving husband of 72 years, George, and her sons, Arno (Joan) and George (Jill). She will be deeply missed by her grandchildren, Michael (Rosa), Phil, Paula and George, and great-grandchildren, Mattias, Damian and Annika. She is also survived by her youngest sister Erika (Uli), sisters-in-law Anni and Heidi, and many nieces and nephews from Germany to USA. She was predeceased by her mother and father, mother and father-in-law Katharina and Paul Wachs, her brothers and sisters, and brothers and sisters-in-law.
A private interment will take place on Monday, July 13, 2020 at 3:00 p.m. at Glen Lawn Memorial Gardens, 455 Lagimodiere Blvd. A Celebration of Life will follow at a later date.
Flowers are gratefully declined. Should you so desire, please make a donation to either the St. Boniface Hospital Research Foundation or to the Heart & Stroke Foundation of Manitoba.