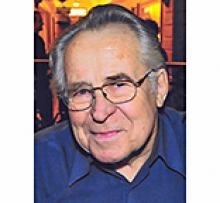 It is with deepest sorrow that we announce our beloved husband, father, grampa and great-grampa entered into eternal rest on July 8, 2020.
Helmut was born in Czarnobrud, Poland on December 2, 1932. He immigrated to Canada in September of 1952, settling in Winnipeg, where he met and married Marjorie on November 28, 1953. He was employed for a short period by the T. Eaton Company, following which he joined the staff of Canada Packers Limited. While with Canada Packers Limited he was active in the Packinghouse Workers Union, Credit Union where he held the position of president for several years, and was also a member of the Canada Packers Quarter Century Club. He retired after 34 years of dedicated service. Helmut was a member of the Deutche Vereinigung von Winnipeg for more than 25 years, where he spent many weekends socializing and dancing. He loved to cycle and "hike" with his wife. Gardening, winemaking, travelling south in the wintertime, and west to visit our son, grandchildren and great-grandchildren, were his favourite pastimes.
Helmut will always be remembered for his caring, unselfish and helpful attitude toward everyone.
Left to cherish his memory are his loving and devoted wife, Marjorie; sons, Tom, Jen of British Columbia and Robert (Bob) of Winnipeg; grandchildren, Holly, Melanie, Crystal, Dillon and Kianah; great-grandchildren, Phoenix, Ethan, Hudson, Tayla, Mason and Ava; brother, Richard of Toronto; sisters, Elsa Hernando of British Columbia and Monika Hernando of Toronto; numerous nieces, nephews, aunts and uncles. He was predeceased by his father, Leopold, and mother, Lydia.
In accordance with Helmut's wishes, cremation has taken place. A memorial service will be held at a later date.

How great is God's grace to have given you
to me to love for a lifetime.
Schlafe Süss

Family and friends may sign a book of
condolence online at
www.desjardinsfuneralchapel.ca.