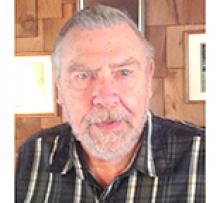 After a short illness, Dieter (84 years of age) passed away on June 24, 2020.
Dieter is survived by his wife, Maureen (Kennedy); his children, Bruce, Ingo (children, Kurt and Taja), Rhonda Bonchuk (husband, Robert; children, Steven and Carly) and Dixie; and his sister, Edith; and nephew, Michael. He was predeceased by his parents, Kurt and Elisabeth; and niece, Brigitte.
Dieter was born in Egelsbach, Germany. At the age of 21, he immigrated to Canada with the goal of becoming a farmer. He and Maureen married in 1960, and in 1961 they moved to Binscarth, Manitoba, where they owned and published the Binscarth Express weekly newspaper. It was here they discovered they really enjoyed southwestern Manitoba. In 1965, an accidental fire razed the business, and after continuing to publish the newspaper for another year out of their home, they chose to pursue Dieter's dream of becoming a farmer. So it was back to Winnipeg, where Dieter had begun his life in Canada, working at the Winnipeg Zoo. He now became an editor and writer, as well as five years in the Environment Information position with the Provincial Government. During this time, they purchased a small farm in Clandeboye, Manitoba, and later expanded to a larger farm near Balmoral, Manitoba, raising sheep, chickens and pigs. And children. In 1978, they were able to acquire farmland near Arrow River, Manitoba, which delighted the whole family. He and Maureen lived there more than 40 years before his death.
His lifelong interests were wildlife photography, planting trees, and a love of dogs.
It was Dieter's wish that he be cremated, and that there be no service or memorial event.
For those so desiring, donations may be made in Dieter's memory to the Manitoba Wildlife Federation at www.mwf.mb.ca