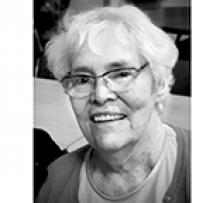 We are deeply saddened by the loss of our Mum, Nana, Great-Nana, Nedra May (Childs) Ashton. The heart and soul of our family passed on July 8, 2020.
Left to cherish her memory are her sons, Steve Ashton and Hari Dimitrakopoulou-Ashton, Martin Ashton and Karen Ashton, and Alan Ashton and Kate Butler; grandchildren, Niki, Alexander, Sarah, Genny, Claire and Taylor; great-grandchildren, Leonidas, Stephanos and Elodie; stepgrandchildren, Bennett and Emmett; Mum's family in Winnipeg nephew Mathew, Michele, Emily and Kaitlyn; Mum's family in Alberta; Mark, Julie; Diana, Simon and families and family in the UK.
Born in Basingstoke, England, Mum lived through the Second World War. Living with her mum and dad, brothers, Jim and Les, and sister Irene in a small cottage that her dad lived in because he worked with British Rail near Guildford, Surrey. Like many others she kept calm and carried on and survived the bombs being dropped during the Blitz.
After the war Mum began work as a secretary, by all accounts an absolute wiz at typing and short hand. At a time when few travelled far, she set out to see England by bicycle, later she even camped out on the street to see Queen Elizabeth's coronation procession. Something she proudly relayed to Prince Charles during a royal visit to Canada many years later.
Mum was an accomplished athlete and an avid dancer, a passion that led her to a dance where she met a Welshman serving in the military, John Ashton. They married in 1955.
Tragedy struck the Child's family when Mum lost both her Dad and Mum in their 50s. While most of us never knew our grandparents and great-grandparents, Mum channeled their legacy to become a great Nana and with three great-grandchildren and another on the way, a great Nana to a new generation.
Mum and Dad started a family that grew to three sons, and in 1967, made the fateful decision to immigrate to Thompson, Manitoba, Canada.
Thompson was so new that it didn't appear on any of the maps that we had, but soon Mum was building a family in the North and working at RD Parker Collegiate. She became active in the Legion, five-pin bowling and darts, including making it to the Women's Doubles national finals.
Mum was very pleased to help bring her sister Irene and family, and brother Les and family to Canada, initially to Thompson.
Mum travelled the world with Dad's work to Indonesia. She had a love for lakes and the sea with visits from Greece to Australia, winters in Victoria, summer visits to Gimli, and of course many trips back to the UK.
As the family grew with more and more in-laws, grandchildren and great-grandchildren, Mum was always there bringing the family together. When Dad retired, Mum and Dad moved to Winnipeg where once again Mum was the center of the family, always supporting us and following our every move.
In recent years Mum's health took a downward turn with what was initially not diagnosed but turned out to be vasculitis. She received treatment and was discharged to her new home at Shaftesbury Retirement Home in Winnipeg but told she wouldn't be able to walk again. They didn't know Mum, Nana. When her electric wheelchair broke down for a week she decided that she needed a way to get out in emergencies so she literally taught herself to walk again, something that shocked many of the other residents at Shaftesbury.
Over the year's Mum became more and more Canadian but never lost her English accent. This led to an interesting exchange at the bank after Dad passed away. The bank employee asked Mum where she was from. After repeating the question for Mum who was hard of hearing. "Thompson" she answered. "No, where are you really from? the employee said, "Thompson" Mum insisted. "We built our home, raised our family there. We were never happier."
As we are saddened today by her passing, we remember those happy times. We remember a strong and resilient woman who was always there for us, whose legacy we will all carry on.

"Miss you Mum. Miss you Nana."