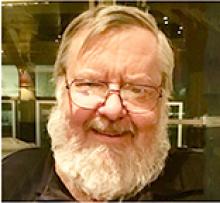 Glen grew up on the family farm north of Killarney, Manitoba. Glen attended Northcote School. He later attended Killarney High School after the farm was sold and the family moved into the town of Killarney.
In high school, Glen found a love of football, and loved playing for his school's team, and was a lifelong fan of the Winnipeg Blue Bombers. Glen was able to attend many Bomber games and even a few Grey Cups. Needless to say, he was very excited when the Bombers won the Grey Cup last year.
Another love of Glen's was swimming. He grew up swimming in the Pembina River, Killarney Lake and Lake William during family reunions. Later as an adult, Glen learned how to scuba dive and was able to take many scuba diving trips with his friends.
Glen was a lifelong animal lover, with an especially soft spot for cats. As a child, he would carry up the yellow farm cat to his room, where the cat would stay with him until he fell asleep and then return out to the barn for the night. Over the years, Glen opened up his heart and home to many cats, which he would tell tales of their adventures and personalities at family dinners and gatherings.
Glen was a computer whiz before many in his family even understood what a computer was. He attended Red River College for electronics, and worked for many years at Advance Electronics, working on air conditioners and remote car start installations. Later, he worked at Absolute Autoguard, where he worked on remote car start installations and outfitting police and conservation officer vehicles. Recently, Glen worked as an Inventory Manager. Glen was always happy to take a look at your vehicle and help install any new gadgets that were purchased. Glen owned many favourite cars over the years such as his Mustang, Cadillac and Lincoln, and then shocked the family when he purchased a magic van in the 1980s.
Glen was also an avid reader. He was well versed on current events and sports. He was the go-to guy for any questions we had on cars and electronics. He always seemed to "know a guy" to help us out with anything his family needed. Glen was very outgoing and loved spending time with his many friends, often going to see them after work and on weekends. He remained a loyal, longtime friend with his childhood friends from Killarney, and many others he accrued over the years.
Glen is predeceased by his parents, Florence (née Scott) and Albin (Albert) Faaren. His sister Flora Nordman and brother-in-law Dennis Nordman, his brother Alvin Faaren and sister-in-law Florence Faaren (née Johnson), and niece Tammy Faaren.
He is survived by loving nieces, Lisa (Arnie) Beraro, and Gina (Phil) Fleury and nephews, Conrad (Kathy) Nordman and Greg (Kathy) Faaren. He was also a proud great-uncle to Holly (Devin), Adam, Kirsten, Liam, Riley, Mikayla, Anna and Ryan. He was also a great-great-uncle to Lucina and Jaxon.
Glen will be remembered for his unique, deep, comforting laugh, his large "teddy bear" presence, and how great of a friend and family member he was.
As per Glen's wishes, there will not be a formal funeral, instead a celebration of his life will be held at a later date. His ashes will be laid to rest in the Caribbean waters as he requested.
Instead of flowers, we ask that to honour his memory and love of animals, donations be made in his name to the Winnipeg Humane Society.