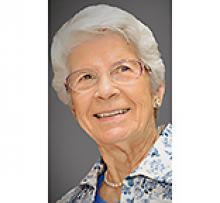 
Today, on July 12, 2020, the good Lord called on our Aunt Jean, the Matriarch of our family, to help him look after future generations of the Soloway clan. So, when the Angels came to call on her at 6:40 this morning, she willingly accepted the challenge to watch over the family she loved so dearly.
She was born on June 11, 1929, in Pine River, MB. The last of 12 children born to Nicholas and Amelia Soloway, who immigrated from Ukraine in 1905.
She was predeceased by her loving husband Alex, of 53 years; son David at age 62; her six brothers, Joe, Tony, Bill, John, Metro and Peter; and her five sisters, Olga, Mary, Anne, Helen and Kay. There are over 200 descendants of her siblings left to mourn her passing.
Upon graduating from high school Pine River, Jean moved to Winnipeg to study as a dental assistant. While working in this industry, she met her future husband, Alex. When he was transferred to Saskatoon, she eventually joined him there and shortly after they became husband and wife on May 24, 1952. When they were transferred back to Winnipeg, Jean started employment with C.I.B.C. She retired from there in 1990 after working her way up to middle management. She was also very involved with the Kinette Club of Winnipeg, the Ladies Auxiliary of the Kinsmen Club, volunteered at the Canadian Cancer Society, and when time would allow, Jean enjoyed her time on the golf course.
Jean and Alex spent many years travelling with friends to Hawaii and other warm climates. She also took up downhill skiing in her later years. She loved that she was able to ski in Banff and visit their son, David, who lived in Calgary at that time.
The family wishes to thank Riverview Health Centre staff that provided her with special care during her seven months of residency there.
According to Jean's wishes, cremation has taken place and a private family interment will take place later at Elmwood Cemetery, where she will be laid to rest beside her husband Alex, and son David.
In lieu of flowers, donations may be made in her memory to the Park Manor's Culture Club, 301 Redonda Street, Winnipeg, Manitoba R2C 1L7.