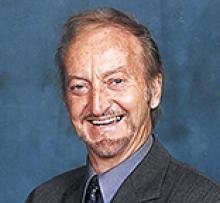 It is with heavy hearts that the family announces the sudden passing of Paul Edward Johnson in Winnipeg, Manitoba. After a short stay in hospital, he succumbed to the effects of a heart attack. Beloved husband to Ollie, father, grandfather, uncle, brother, and friend to all who knew him.
Paul is survived by his loving wife of 65 years, Ollie; his children, Paula (Daryl, Kennedy, Malone), Rod (Julia, Cole, Tyler); brothers, Donald and Cy; nieces, nephews, friends, and many friends from their lifetime of ballroom dancing. Paul was predeceased by his sister, Margaret.
Paul was born in Lundar, Manitoba, and was always proud of his Icelandic heritage. He moved to Winnipeg when he was 18 years old to begin a career in cleaning with Perth's Cleaners.
Soon after, he met the love of his life, Ollie. In 1962, with an entrepreneurial spirit, they began their own successful business, Certified Carpet and Upholstery Cleaners. 58 years later, the company is still family owned and run, and into its third generation.
Paul and Ollie were beautiful ballroom dancers, and made many lifelong friends through the East Kildonan YMCA Dance Group, and the Westview Dance Club. They were also consummate hosts. An invitation to their home was always met with a warm greeting, lots of laughter, and an amazing meal.
Paul enjoyed an early retirement, and he and Ollie travelled extensively around the world.
Dad was first and foremost, a family man. There was nothing more important to him than spending time with Mom and his family. Mom and Dad did everything together. People often commented that they were "two peas in a pod". Grandpa was especially proud of his grandchildren, and never missed a recital, graduation, volleyball, hockey or soccer game.
The family enjoyed many holidays together, most recently in January, 2020, on a South American Cruise.
There will be no formal service. A private family dinner will be held in his honour.
In lieu of flowers, donations can be made to the Canadian Cancer Society.