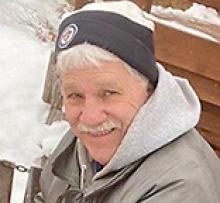 It is with the heaviest of hearts that we announce the sudden passing of Steve Klowak, at the age of 69, at St. Boniface General Hospital. The eldest son of Ollie and Steve Klowak, he was born in San Gabriel, California on January 2, 1951.
Left to cherish his memory are his loving wife Arlene Klowak, sons, Chad and Kevin Klowak, daughters-in-law, Sarah Klowak and Carlea Jones, granddaughters, Kenzie and Presley Klowak, his sister Joanne McMahon, and cousin Angie Halabura.
Steve grew up in the North End of Winnipeg residing on Lansdowne Avenue with his mother Ollie and sister Joanne. He lived down the street from his longtime friend Brian Zajac that he lost suddenly several years ago. Dad was an accomplished athlete playing football, baseball, and one of his greatest passions hockey. He made a strong go at playing professional hockey in the NHL making it as far as playing for the San Diego Gulls, the LA Kings farm team at the time, before getting homesick and returning home to Winnipeg. Dad started his career working for Canada Packers before it closed, and then spent many years working for Quintex Uniform and Mat Rentals while living in East Kildonan on Weeden Street, before moving to Paradise Village when his first granddaughter was born in 2007. His last 10 years of employment were spent working for Ste. Anne Co-op in Ste. Anne, Manitoba where countless people fell in love with his hard work and easy to talk to personality. Most people in the community missed, and still miss, his huge heart and great conversation after he retired a few years ago.
Dad was a loving husband to his wife Arlene, and his friends and family are what mattered most to him. He passed on his stick handling skills and ability to put the puck in the net to his youngest son Kevin, and coached both boys for many, many years in hockey, baseball, and soccer. Chad was very passionate about golf in his teenage years, and started a family tradition years ago with Dad and Kevin, playing for golf trophies at Falcon Lake Golf Course every May, August, and September long weekends that got very competitive at times. Dad finally managed to win the large September Championship trophy in 2019 after years of not being able to beat his sons - even though all his short, missed putts were neglected. He earned the nickname "wrists" due to his Jack Nicholas type of putting style. Arlene and Steve were very avid campers from the day they met, and continued to camp at Falcon Lake most summers bestowing the love for lake life in both of their boys. Mom and Dad spent many years camping in the seasonal campground each summer at Falcon Lake with the love of their fifth wheel and camp fires. Dad's favourite hockey team was the Montreal Canadiens and always followed them intensely over the years. Steve was an avid movie lover, making sure to always spoil them for others. He was also a huge James Bond fan.
His later years in life were spent caring for his loving wife Arlene while being there countless days, evenings, and nights for his two granddaughters, Kenzie and Presley. Steve could be very stubborn at times, and never took life too seriously. His family and friends know that not too many people could possibly have had a larger, more caring heart, and patience than our father. Nothing ever seemed to phase Dad no matter what life threw at him, nothing. We will always strive to be like Steve and treat people the way he did. One of his all-time favourite pastimes was splitting and piling firewood. Firewood will just never be the same without you Dad. We guess that giant heart was just tired. We know you will always be there for us, and we will always draw on that strength, love, kindness, and patience you possessed forevermore. You can rest now Dad.
Steve's Celebration of Life will be held at Chapel Lawn Funeral Home and Cemetery and will be by invitation only due to COVID-19 restrictions. Floral tributes are gratefully accepted and can be delivered to Chapel Lawn by Friday, July 24.