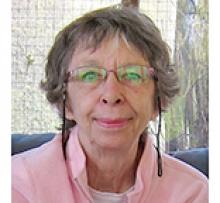 Maureen Schwanke (nee Kennedy) succumbed to liver cancer at the age of 77.
Maureen was born December 1, 1942, in Niagara Falls, Ontario, moving with her parents and siblings to Winnipeg, Manitoba in 1952. She met and married Dieter Schwanke in 1960. In 1961, with new baby, Bruce, they bought the Binscarth Express weekly newspaper. Neither Maureen nor Dieter (who immigrated to Canada in 1957, and for whom English was not his first language) had any experience running a newspaper, or any business, but both possessed a love of reading and knowledge, and they both worked hard to provide the community with a quality newspaper. Maureen was not the housewife expected of the times, but rather worked every day at the paper with Dieter and their staff of one, as well as taking care of the growing family; son, Ingo, arrived in 1964. When the newspaper and office burned down in 1965, they continued to publish the newspaper for one more year from home, but ultimately took that opportunity to begin farming. They moved to Clandeboye, Manitoba, and ran a small farm, where daughters, Rhonda and Dixie joined the family. From Clandeboye, they bought a farm in Balmoral, Manitoba, and raised sheep, pigs and chickens. Maureen and Dieter moved to the farm in Arrow River in 1978, having wanted to return to the area since their time in Binscarth.
Maureen's legacy goes beyond children and farming; she was also a writer, beekeeper, wool spinner, knitter, bookkeeper, and artist. She was passionate about protecting the environment. Many will remember her as their tax consultant, and she thoroughly enjoyed her clients and helping them in any way she could. As a member of the board of the Mid-West Arts Council, Maureen worked to promote artists in the community, as well as taking part herself in art shows and competitions. For a few years, she and friend, Leslie Norek, ran the Ukridge Art Gallery and Tea House from the farm, providing a venue for local artists to display their work, as well as providing a local destination and business for the surrounding area, all of which were important to Maureen.
Maureen was predeceased by her husband Dieter, in June, 2020; parents, Roy and Frances; and brother, Dale. She is survived by her sister, Norma; and children, Bruce, Ingo (children, Kurt and Taja), Rhonda Bonchuk (husband, Robert and children, Steven and Carly) and Dixie; niece, Jacqueline; and nephews, Ross and Spencer; and of course, her ever faithful dog, Scruffy.
It was Maureen's wish that she be cremated, and that there be no service or memorial event.
If desired, a donation can be made to the Hamiota Health Centre, or the Mid-West Arts Council.