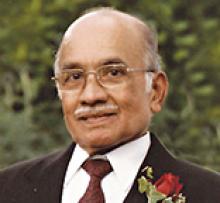 An accomplished and independent man, generous in his love of family, Yeshwanth Attawar (Yesh) passed away with grace on July 11, 2020, surrounded by all his closest family.
Born in Mangalore, India, he is predeceased by his parents, Yamuna and Damodar; his sisters, Heera, Neera, and Chitra; and his brothers, Pramod and Jaysheel. He leaves: his wife, Sachitha; his daughters, Latha (Jeff), Dhiwya (Greg), and Sneha (Dustin); and cherished grandson, Jaysheel Louis.
Strength of conviction, integrity, and devotion to family set Yesh apart as a leader. He grew up with a large, extended family in Mangalore with close formative relationships that defined his values of hard work, magnanimity, and compassion for others. As the eldest son, he took on the mantle of leader in the family early in life, offering unwavering support when times were tough. Deep reverence for his elders, and affection for his siblings, younger cousins, nieces and nephews brought him back to India many times.
Seizing new opportunities, Yesh embarked on a career in finance which took him around the world. Carving his own path, he set out to East Africa where he joined the Uganda Commercial Bank in 1952. Starting as an accountant, he was quickly promoted to branch manager, serving for more than 15 years with distinction. He continued to visit India where he met and married, Sachitha, his life partner, in 1962. Together they returned to Africa where their three daughters were born. The family travelled extensively across Uganda, living close to the magnificent Lake Victoria and Nile River. In Uganda, Yesh formed many close friendships with a large community of expats from Europe and Asia. He was an active member of the Lions Club. His love of sport, beginning in his youth with cricket and field hockey, continued with squash, tennis, and golfing. These times in 1950s and 1960s Uganda were some of his happiest.
Several turning points in Yesh's life revealed remarkable strength of character. His thriving career and community of relationships in East Africa were suddenly interrupted by the mass expulsion of Asians from Uganda in 1972, erupting within a sociopolitical context of colonialism, apartheid, and social hierarchy. Yesh faced the political and economic upheaval fearlessly, embracing change to begin a new life in Canada with his young family. The family came to Winnipeg in the winter of 1972 with few possessions and much hope. Yesh worked tirelessly to start over, fighting through many obstacles for a better life for his family, guided by a strong sense of social justice. Within a short time, he was able to continue work in finance, eventually becoming a manager with Unicity Credit Union in 1977. He soon formed a strong, close community of friends in Winnipeg. He was a proud mason with the Grand Lodge of Manitoba in 1975, quietly supporting communities in Winnipeg. He continued to work with Investors Syndicate/Investors Group for many years before having to retire due to illness in what became a long and courageous battle with autoimmune disease. During his retirement, his focus shifted to time with his family, and to a lifelong love of reading of literature and philosophy.
The ordinary is the extraordinary in Yesh's life and example. Fluent in four languages, he remained active, still walking, and sharing stories and ideas with family into his 90s. His courage in the face of pain and hardship, effervescent joy in the friendships and relationships he cultivated, and quiet wisdom listening to the people around him are some of the many gifts he leaves us. A devoted husband, father, and proud grandfather, he was committed to his family whose accomplishments remain part of his legacy. Inspired by his strength and blessed by his long and meaningful life, we celebrate the beauty of his soul in his journey toward freedom and peace.
A private funeral and a celebration were held with close family on July 17 and July 23.
The family wishes to thank all who supported and cared for Yesh in the last years of his life. He cherished each day.
In lieu of flowers, please consider a donation to Amnesty International in Yesh's name to honour his beliefs in human rights and human dignity for all.

I have passed a mountain peak
And my soul is soaring in the firmament of complete and unbound freedom...