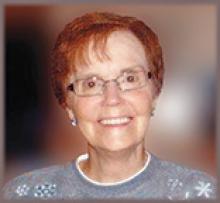 
Jane passed away at the age of 78 years on July 22, 2020, at the South Calgary Health Campus.
She was the loving mother of two daughters, Karen Schram (Rob) and Susan Christie (Bob). Jane will also be missed tremendously by her lifelong friend Roberta Fitzgerald (John). Besides her daughters and best friend, she is survived by her sister-in-law Sylvia Wilson, niece Christine Wilson-Macleod (Jake) and their children, Rowan and Quinn, as well as her cousin Carole Henderson. Jane was predeceased by her parents, Dora and Mel Wilson, and her brother Jim.
Jane was born in Edmonton and moved to Winnipeg with her family at the age of nine. She grew up in River Heights and attended Kelvin High School. Jane spent most of her career working as an executive assistant in Winnipeg, her longest tenure being with Pattison Sign Group for 19 years. It was here that she made many good friends. Jane was such a strong, brave and independent woman and her daughters were her world. She raised them on her own and the three of them stuck together like glue their whole lives. Upon retirement in 2003, Jane moved to Calgary to be closer to her daughters. They shared so many fun adventures together, like trips to Kimberley, BC, Kananaskis Country, Vancouver Island and San Francisco. Most special was the holiday in New York City to celebrate her 70th birthday. She enjoyed so many special family dinners, as well as the most memorable Christmases. Every year Mom bought us so many gifts, she had to load them into a garbage bag in order to carry them all into the house! A former season ticket holder, Jane was so thrilled to see her beloved Blue Bombers hoist the Grey Cup last year! She also followed the Calgary Flames (loved the shootouts!) and enjoyed many days planting flowers with Susan in her beautiful garden every spring. Jane took part in many activities - from yoga classes to guitar lessons and took up golf in her 50s. In her later years, she loved doing crossword puzzles on her iPad, reading Danielle Steel novels and watching her favourite soaps and reality shows. You couldn't ask for a better Mother - always there to listen and was genuinely interested in hearing all about the goings-on in the lives of her friends, neighbours and children. Our phones will seem silent now.

We will always love you Mom.
Forever in our hearts.

Interment will take place at Chapel Lawn Memorial Gardens in Winnipeg. A family celebration of Jane's life will be held at a later date.