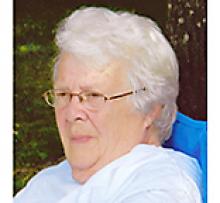 
It is with great sadness that we say goodbye to our mother, Marjorie Anne MacIver, who passed away at Pinawa Hospital with family at her side, on July 13, 2020.
She was predeceased by her husbands, Jeffery Bain Austen, Charles Sutherland MacIver; and her son, Douglas Bain Austen.
She leaves to mourn Cathie Austen (Larry Rudniski); Val Austen-Wiebe (Myron Wiebe); Sheri Austen (Neil Davis); Tracy Wasylak (Terry); Jennifer Weimar (Jon); Robert MacIver (Shannon); Tannis Antonio; Heather MacIver (Siegurd Weber); Graeme MacIver (Rae); Malcolm MacIver (Kristin Pichaske). In addition, her two surviving sisters, Mudito (Dorothy) Drope (Bodhi), Nancy MacLean (Chuck); and many grandchildren and great-grandchildren.
She was a graduate of Kelvin High School, University of Winnipeg, and had a truly diverse career with Fisheries and Oceans, The Commodity Exchange, and the Health Sciences Centre. In her retired years she was an avid volunteer involved in many community organizations including St. George's Church, Dragon's Ladies, the Pioneer Club Kitchen Band, the Two Rivers Senior's Council, past president of Lac Du Bonnet's Pioneer Club and Horticultural Society, to name a few. In 2017, she received a recognition award by the Manitoba Council on Aging with appreciation for her outstanding contributions in support of Age Friendly communities, and for her many years of volunteer service in Manitoba.
In her spare time, she was a passionate and gifted gardener, and many admired her vast gardens. She loved knitting and playing cards, and we hold fondly to our memories of many spirited card games with her at the lake.
Mostly though, she will always be remembered for her tenacity and feisty nature. She confronted many challenges throughout her life, and fought hard to overcome these. We have all been strengthened by her vibrant will and her vast character.
A service in her memory will be held at 11:00 a.m. on Saturday, August 8, 2020, at Sobering Funeral Chapel, 1035 Park Avenue E., Beausejour. A reception will follow the service in Lac du Bonnet.
In lieu of flowers, donations will be gratefully accepted to the Two Rivers Senior's Programs, Box 272, Pinawa, Manitoba R0E 1L0.