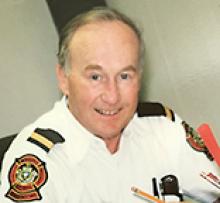 
After a long and fulfilling life, the family of Thomas Mills announce his peaceful passing on Sunday, July 26, 2020.
Tom was born to Robert and Julia (nee Hrychany) in Winnipeg, MB. He spent many of his childhood summers in Cooks Creek, MB on the farm where his mother grew up. He attended Hugh John MacDonald School and Daniel McIntyre Collegiate Institute. After a brief stint in the automotive industry, he joined the Winnipeg Fire Department in 1955. Tom met the love of his life, Ruth Bartko, in 1958 and they married two years later in Pine River, MB. Tom and Ruth raised three children in Tom's childhood home on McDermot Avenue. Over the years, they opened their doors as a second home to many family and friends.
Tom was a licensed amateur radio operator (VE4SE) for over 55 years and enjoyed communicating with other Ham operators from all over the world. He spent countless years volunteering with essential communications for flood interventions, marathons, emergency services and the Canadian Red Cross.
After serving over 39 years on the Fire Department, Tom (affectionately known as "Squeaky") retired as a Battalion Chief but continued to serve with the Honour Guard until 2019. He and Ruth enjoyed another 26 years together, more recently celebrating their 60th wedding anniversary in May. They spent many of their retired years travelling across Canada in their motorhome, spending time with their children and grandchildren, and continuing with volunteer work together.
Tom was well known for being the life of the party and was no stranger to pulling elaborate pranks. He was a great public speaker who rarely needed a microphone to be heard. Aside from the need to be 30 minutes early for absolutely everything, his patience, dependability and kindness were among his defining qualities. He was fiercely loyal to family and friends and could always be counted on at a moment's notice.
Tom is survived by his wife Ruth, daughters, Wendy (Jim) and Judy (Tim); grandchildren, Christa (Damon), Jason (Kate), Darryl (Chantelle), Daniel (Kate), Hillary (Craig), Aydan, Brandt and Lauren; great-grandchildren, Kayla, Courtney, Haleigh, Sophia, Emily and Bronson. He was more recently predeceased by his son Ken, and brother Robert.
Funeral service and burial will be deferred to a later date.
In lieu of flowers, a donation may be made to the Fire Fighter's Burn Fund.