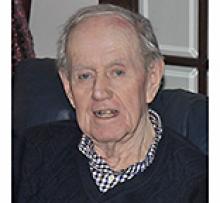 
Ronald Murray Clubb passed away peacefully on Wednesday, July 22, 2020, at the age of 89.
He was born to William Clubb and Maude Smith and was predeceased by his older siblings, Gordon, Edward and Shirley. Ron grew up in Winnipeg, spent most of his working life in Montreal, and returned to Winnipeg in retirement.
Ron is survived by his wife of 67 years, June (Smullen); three children, Roni (Craig Chamberlin), Cary (Julie) and Christopher (Karen Eisen); six grandchildren, Erin, Megan, Ashley, Emily, Zara and Elliott, and great-grandchild, Eleanor.
In his teenage years in west-end Winnipeg, Ron played basketball in the Winnipeg City League for the Whirlaways, worked for the Winnipeg Post Office, graduated from Daniel McIntyre Collegiate, and met his future wife June at an Icelandic Church social.
Ron joined Air Canada at age 17 in Winnipeg working in the Trans Canada Airlines Stores, moved to Montreal in 1962 where he held roles in purchasing, and retired as Director of Purchasing and Inventory Control after 41 years of exemplary service.
Ron was an avid golfer with a membership at Hawkesbury (Ontario) Golf Club. He enjoyed playing with colleagues and friends and introducing his sons to the game. He actively supported his Montreal West Island community and children's sporting development, coaching basketball and serving as president of the Brookwood Athletic Association from 1969 to 1973. Ron was extremely proud of his children's university education achievements, their professional careers, and their strong marriages. His children thank Ron for the sacrifices he made to support their success and the principles he instilled in them.
In retirement, Ron and June spent winters in Clearwater, Florida as "snowbirds" where Ron was a regular on the golf course and the shuffleboard court. They greatly enjoyed visiting their children and families in western Canada, Tennessee, and London, England. Ron also enjoyed a good game of cribbage, playing chess, and cheering on his favourite basketball teams, the Boston Celtics, the Duke Blue Devils, and his granddaughter's University of Regina Cougars.
Ron was very courageous through the last years of his life as his health declined. The strength he showed to cope with the health challenges came from his fierce commitment and devotion to his wife and love of his life, June. The family extend their heartfelt gratitude to extended family, Bob, Sheila, Leslie and Susan for including him in family gatherings and supporting him through his final Winnipeg years.
Ron will be cremated and interred at Chapel Lawn Cemetery in Winnipeg eventually with his beloved wife June for eternity. He has chosen not to have an end of life service.
In memory of his life a donation can be made to the charity of your choice.