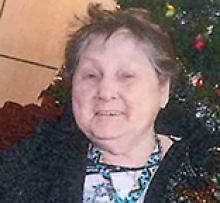 
Janet passed away peacefully at the Selkirk General Hospital.
She was predeceased by her husband Stan; parents, Iris and John Neufield; Uncle Bernie; and her sister Carole Riguidel.
Janet is survived by her children, Kimberly, Jerry and Joseph; sister Brenda; many grandchildren and great-grandchildren; as well as nieces and nephews.
Janet loved her life and home in Gimli with her beloved husband Stan. After his retirement, they travelled to Spain, France, Italy, Portugal and Hawaii. No matter the season, Janet enjoyed watching activity on the lake from her living room window. She loved entering contests, finding bargains and playing bingo. She also supported many charities.
A heartfelt thank-you to all the staff at Selkirk Geriatric Centre who worked so hard to improve Janet's quality of life.
As per Janet's request, no service will be held.