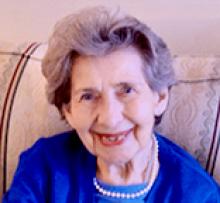 
With great sorrow we announce that Kay passed away peacefully of natural causes, at her home in Winnipeg, at the age of 99.
She was predeceased by her husband Ferdinand (Fred), her mother and father Mary and Paul Lobasz, and her brother Michael Lobe. She is survived by her children, Linda Birarda (Len), Joanne Proteau (Gerry) and Randy Otto (Terri), grandchildren, Sharlyn Calder (Greg), Kimberly Pilcher (Teague), Lindsey, Ethan and Alexander Otto, as well as great-grandchildren, Austin and Sara Pilcher.
Kay was born in Winnipeg and grew up in Fort Rouge. After high school she worked at Picardy's Bakery and MacDonald Bros. Aircraft. Marrying Fred after the Second World War her first homes were on Parr Street and then Centennial Street in River Heights. They moved to Seven Oaks in West Kildonan and then to Bruce Avenue in Silver Heights in 1954. It was there that for 20 years Kay raised her family and made many lifelong friends with neighbours from the street.
Kay took pride in cooking and would spend all day preparing Sunday evening family meals. Those days and almost every special occasion brought the entire family together and created close bonds and loving memories. She was an impeccable homemaker and took great pride her house, yard, gardens, and her appearance.
Her retirement years were spent on Pinehurst Crescent. In Westwood where she took up golf and enjoyed her association with "The Niners" at St. Charles Country Club. Her fondest memories were of the grandchildren and families enjoying beautiful days around the swimming pool.
In later years she was fortunate to have the comfort of her cozy apartment at Lion Estates. Her Catholic faith and positive attitude helped her deal with health issues brought on by dementia. She was well cared for daily by her daughter Joanne and care worker Janet Didsbury. Our gratitude goes out to Carol Rempel, her care worker, nurse, and friend who worked tirelessly during the last five years, giving Kay the opportunity to spend that time in comfort and peace in her own home.
Kay was a kind, gentle, and generous person and she will be missed.
Cremation has taken place at Chapel Lawn Funeral Home and a private family Celebration of Life will be held at a later date.