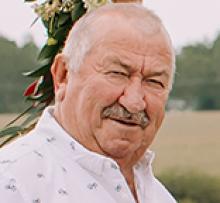 We lost a close family member and great friend suddenly, on Friday, July 24, 2020, with the death of Steve J. Bejzyk.
Born on February 14, 1948, he made Komarno, Manitoba his lifelong home and leaves to mourn his sister Julia Roik, nieces, Carol Banera (Robert), Janet Milne (Doug), and Bev McDonnell (Grant), nephew Bradley Bejzyk (Arlene), numerous great-nieces and nephews and one great-great-nephew. He was predeceased by his parents, Hryn and Olena Bejzyk, brother Harry and sister-in-law Rose Bejzyk and brother-in-law Bill Roik.
He came to Canada from the Ukraine, in his mother's womb and was born within the first few months of his parents' arrival in the new country. Steve worked extremely hard all of his life. In the early years, he worked alongside his mother and father on the family farm and was extremely handy with machinery, which eventually led him to a career as both an operator and a factory worker. Over the years, he spent many hours on the road as a truck driver, travelling to many parts of Canada and the US. As a heavy equipment operator, he would spend many months on the road or up North and would often come back with great stories about his travels. In later years, he owned and operated his own trucks, worked odd jobs and spent time in the bush cutting wood.
Steve enjoyed the country life and most things country. He lived his whole life on the Bejzyk homestead where he proudly flew the Ukrainian flag as a tribute to his heritage. He loved traditional Ukrainian music and enjoyed travelling to the Dauphin Ukrainian festival where he was often joined by many lifelong friends. Steve had a great sense of humour and loved to drive around the country side to visit his many friends and neighbours. He was affectionately known to many by his nickname "Buckshot", after a Halloween prank and a short encounter with a local farmer ended with a few permanent scars in his backside.
The one thing that stood out the most about Steve, was his love of life and adventure and his caring for others. For that, and many other things, he will never be forgotten.
A private service will be held with a Celebration of Life to follow at a later date.
In lieu of flowers, donations can be made to the Heart & Stroke Foundation of Manitoba.