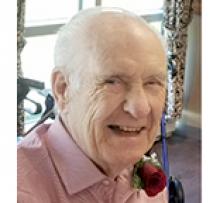 It is with sadness we announce the death of William Allan Stevenson who died July 24, 2020.
Bill leaves to mourn his children, Garth (Lori) and Susan (Tom Dojack); grandchildren, Jan Kass (Malek), Loni Stevenson (Bobby Aymont) and Luke Dojack, and eight great-grandchildren. He was predeceased by his wife of 61 years, Patricia, who died last month.
Bill was born in Paisley, Scotland, September 11, 1934. After losing his father, he immigrated to Canada at 14 with his mother and brother. They settled in Port Alberni, BC where he supported the family working in the sawmill - which caused him permanent hearing damage. Dad moved to Winnipeg, working in many sales positions, and eventually finished his career with Motor Coach Industries. In 1957 he met Mom and they were married in 1958. They enjoyed playing and watching golf together. Dad was also a dedicated fan of Manchester United Soccer Club watching faithfully on Saturday mornings. Mom and Dad loved their haven in Gimli trailer park where they developed longtime friendships and held countless family events.
Dad's greatest joy was his family: whether taking us to restaurants, hosting Christmas dinners, babysitting, or attending countless soccer games and recitals. Christmas was a particular favourite where he would spoil all the kids in his life. He shared the children's excitement in seeing what Santa had brought. Christmas Eve Mom often had to tell Dad and the kids to get back to bed when it was too early to get up. Bill's 85th and last birthday was shared with family and he was so happy that so many came to celebrate.
The most difficult thing for Dad over the recent pandemic was not being able to see family. When we were allowed to visit, his face lit up and stated, "It's so good just to see you".
Dad had many hobbies and history was one of which he read a great deal. He was indeed Canadian, but we were often reminded of all people and things Scottish. He also loved telling and hearing a good joke.
Dad was generous. At Christmas he would donate lots of toys to the Christmas Cheer Board. He would give to the needy on the street, or a loonie to a child in a restaurant and handfuls of candy at Halloween.
Bill was a big personality and will be missed. A big thank you to Dr. Sheldon Permack for all his care.
Dad and Mom will have a private interment in Roland Fairview Cemetery, Roland, MB.
Donations may be made to the Heart & Stroke Foundation of Manitoba.