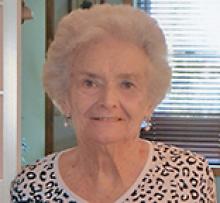 Peacefully on Sunday, July 26, 2020, at her residence in Winnipeg, Elaine passed away. She was 87 years old. She was a wonderful mother and wife to her best friend and husband Erwin who passed in 2008. They were married for 51 years.
She leaves behind her daughter Janice and husband Gordon Hudson, son Robert (John) of Burnaby, BC, and dearest twin grandchildren, Melissa and Garrett Hudson. Also surviving is brother Brian Charman (Janice), sister Bernice Eakin, sister-in-law Doreen Lobson and brother-in-law Norman Lobson, plus many cousins, nieces and nephews.
She was predeceased by her parents, Marjorie and Earl Charman, stepfather Claude Charman, brother Gary Charman, mother and father-in-law Beatrice and Jack Lobson, brother-in-law George Eakin, brothers and sisters-in-law, Lorna and Alvin Lobson, Joyce and Arthur Lobson, brother-in- law George Lobson, sister-in-law Marilyn Lobson, and nephews, Jason Charman and Cameron Lobson.
Mom was a Norwood girl growing up. She developed many great friendships in Norwood. It was through these friendships where she inherited the nickname "Keek", which many friends and family members still called her by today. Mom had generally led a healthy life. It was not until these past few years where her health started to deteriorate. In Mom's early years she worked for the Eatons Retail company until her and Dad decided to have a family. She also worked with Dad for many years completing the accounting and books for brother-in-law Norman's business, Winnipeg Pattern and Model Works. Mom was an avid bowler in her earlier days where she played in league bowling with the ladies of Moore Avenue at the Dakota Lanes every Wednesday afternoon. Mom was a great cook and baker throughout her life. Sunday dinners were something we all looked forward to. Mom and our family enjoyed 42 years of our Brereton Lake cottage spending hours swimming, fishing, canoeing and playing dominos in the evening. She loved her time out at the cabin especially when her twin grandchildren would join her. She developed some wonderful friendships with lake neighbours, Helen and Alfred Tapping and Heidi and John Schroeder.
With her children working in the airline industry Mom and Dad were fortunate to take several wonderful trips. Arizona, Florida, Britain, Scotland, New Zealand, Australia, and in her more recent years Mom travelled to Montreal and spent Christmases in British Columbia with her son Robert. Mom and Dad also had several wonderful trips with brother and sister-in-law Lorna and Alvin. Out of all her trips, mom's favourite travel spot was Hawaii. Thankfully her and dad got to visit the islands on several occasions.
In more recent years Mom had moved into the "The Terraces-Lindenwood Retirement Living" where she had the opportunity to meet and enjoy many wonderful new friends and staff.
Cremation has taken place. With the Covid-19 pandemic, no funeral service will be held. An interment service for family will be held in the St. Vital Cemetery, 236 River Road in Winnipeg.
Donations in Elaine's memory may be made to the Winnipeg Mennonite Seniors Care Inc. (WMSCI), 490 Lindenwood Drive, Winnipeg, Manitoba R3P 0Y5 or to the Faith Lutheran Church Memorial Fund, 1311 Dakota Street, Winnipeg, Manitoba R2N 1V8.