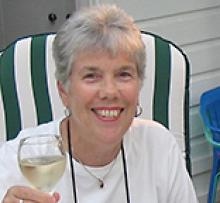 Barbara Ellen Ball (nee Bailey), aged 80, died in her sleep on July 25, 2020 in Winnipeg.
Born to Bert and Hilda Bailey, Barb schooled at LaVérendrye, Earl Grey then Kelvin High School. Barb attended the University of Manitoba where she graduated with her BA in 1961. It was in her university carpool that she met her husband Bruce, in 1960 and they were married in 1962. Barb and Bruce moved to Ottawa, where Bruce found work with the public service and they started their family. Son Joe was born in 1965 and daughter Lesley in 1966. In 1968, Barb and Bruce moved back to Winnipeg to be closer to family. Their third child, son Matthew, was born in 1970.
Barb's strong social justice values led her to volunteer with the Winnipeg Friendship Centre, the Main Street Project, Klinic, Osborne House (now Willow Place Shelter) and other progressive causes. These experiences prompted Barb to return to the U of M to pursue her BSW and MSW degrees. Her studies and work in the field of addiction counselling led her to recognize the need for on-going counselling for survivors of childhood sexual abuse. Gathering other like-minded colleagues, she co-founded the Women's Post Treatment Centre (now the Laurel Centre), where she was the first counsellor and eventually Executive Director as the organization grew. She continued counselling there until her retirement in 1997.
Barb was an active member of Augustine United Church, where she served on several committees and was a long-standing member of the choir. Barb shared her love of choral singing with friends and family at social gatherings and around many a campfire. She and Bruce were avid campers, taking annual trips across the country from Vancouver Island to Prince Edward Island, visiting family and friends along the way. Barb also enjoyed spending time at her Matlock cottage in the summers and in retirement enjoyed 27 February trips to Puerto Vallarta.
Barb was a student at the Forum Art Institute, which nourished in her a passion for art. She was a prolific painter and mixed-media artist, working in serigraph, print making, and later watercolour. Barb had a keen eye for colour. She even convinced her colour-blind husband to travel to Greece and Italy for watercolour painting trips. (This was not a hard sell.)
Barb's life was enriched by many deep and diverse friendships: from the school friends she grew up with to friends met on her travels, in addition to many bonds forged working for various causes and interests.
Barbara was an open, accepting woman. She was a dynamic force for fun and adventure. She was a critical thinker, who never shied away from a debate. She was thrifty - always cut her own hair and melted her lipstick ends to create her own colours. At her home there was only ever powdered milk - half the price but with the same nutritional value.
Barb was a caring and loving partner to Bruce for 58 years, an encouraging mother to her three children, Joseph (Caley Strachan), Lesley (John Anthony) and Matthew (Fraser Valentine) and a supportive grandmother to Emma and Angus Ball, and Sam and Mhari Anthony. Barb is survived by her brother Ted (Phyllis), her sister Ruth Brodie (late John Brodie) brother-in-law Ross Johnston (late Betty-Jo) and their families. Barbara joins many dear friends and chosen family on the other side: Sharon, Percy, Bob, John, Dianne and Gord, and leaves many friends here to grieve her.
Due to the circumstances of the Covid-19 pandemic, a Celebration of Life is being planned for a later date.
In lieu of flowers, the family encourages you to give a gift in Barb's memory to any of the organizations she supported, or to a worthy cause that you feel endeavours to make the world a better place, as Barb did.