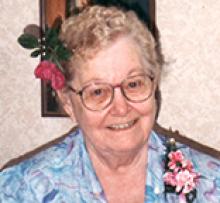 Dorothy was born in Fort William on June 25, 1917. She was raised in Alcona, Ontario, by her foster parents, Mary and George Michaud. In 1934, she married Ernie Lewer. They resided in Alcona and Sioux Lookout with their two daughters, Care and Betty. Ernie died suddenly in 1969. In 1970, she married William Lavoie. They moved to Winnipeg. Bill died in 1980. In 1981 she married Francis Lalonde and they lived a short time in the US. They moved back to her home in Winnipeg, where they enjoyed a short time together. Francis died in a car accident in 1983. Dorothy continued to live in Winnipeg.
She was predeceased by her foster parents; her foster brothers, Gordon, William, Stanley and Edward; her biological father Fred Sutton; her half-brother Frank Sutton; her stepson George Lalonde and her son-in-law Rodger Holmes.
She is survived by her daughters, Caroline Holmes and Betty Fleck (Ken); her stepsons, Leo, Jerry, Robert, James and Thomas Lalonde; her grandchildren, Gary Holmes, Gordon Holmes, Brenda Nash, Robert Richkun, Kathy Delpino and David Richkun; plus numerous great-grandchildren and great- great-grandchildren; sister-in-law Irene Sutton and many nieces, nephews and cousins.
In her younger years, Dorothy enjoyed fishing, picking berries, gardening, cooking, sewing, playing cribbage, dancing and writing poems and stories. She was a member of the Rebecca Lodge.
In later years, as her health declined, she resided at Sturgeon Creek Retirement Centre and then was moved to Vista Park Lodge where she enjoyed bingo, word find games and the company of family, friends and many different volunteers. Thanks to the wonderful Vista Park staff for their TLC. Also thank you to Sturgeon Creek Retirement Centre for all their efforts to keep Dorothy comfortable.
Cremation has taken place. A service will be held at a later date with interment at the Sioux Lookout Cemetery.
In lieu of flowers, donations can be made to Heart & Stroke Foundation or Vista Park Lodge.


Peacefully, on Thursday, July 30, 2020, Dorothy passed away, at Vista Park Lodge, at the age of 103 years.
Arrangements are pending, longer notice to follow.