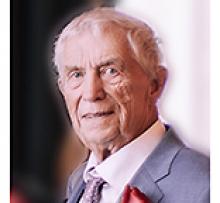 We are deeply saddened to announce the passing of Louis Michael Kennedy on July 28, 2020, passing at the age of 81, surrounded by his family.
Lou is survived by his loving wife Iris and their four children, Lou (Susan), Kim (Mike), Dan (Marina), and Laura, along with his grandchildren, Thomas (Lauren), Sean, Louie (Tina), Cole, Evan, Sara, and Amber.
Lou was born in Winnipeg on December 25, 1938, to Daniel and Wilma Kennedy. Lou attended Saint John's Ravenscourt and subsequently began working at the family business Gaults Limited (Kennedy Floorings) that is still owned and operated by the Kennedy family. Lou and Iris were married on February 24, 1962. Lou's greatest love was his wife, Iris, and believed his most significant achievement was his four children.
Lou lived a life filled with adventure with his wife Iris and children by his side travelling across Western Canada and the United States racing Sprint Cars, which initially began with a 1959 Corvette. Lou's passion for Sprint Car racing continued throughout his life, with his family achieving many significant victories. Lou's passion for racing continued through his involvement with his grandchildren, playing a vital role in their development as drivers, allowing them to go on and win notable racing events. Lou enjoyed working in his shop, creating unique inventions. His family is grateful for his love, life lessons, and continued support throughout his life.
A Celebration of Life is being planned for Lou, of which a date is yet to be determined.