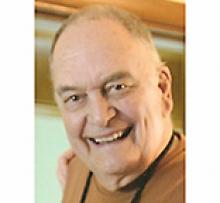 It is with deep sadness that we announce the passing of Fred Steeves on July 29, 2020, at Grace Hospital, at the age of 86.
He is lovingly remembered by his soulmate and love of 37 years, Donna Archer, children, Susan Hong (Len) and grandsons, Gordon and Jeff; Rand (Jackie); Rod (Maria), granddaughters, Jacqueline (Roberval) Da Silva (Raphael, Gabriel, and Michael) and Michelle Steeves, and nieces. He was predeceased by his parents, Evelyn (Brown) and Harold 'Mike' Steeves, by his sister Frances Thorsteinson (Don), and by his former wife Patricia Haig.
Fred was born in Vita and lived in Pinawa and Seven Sisters. He came to Winnipeg as a teenager and attended Glenwood and Glenlawn schools in St. Vital. He loved playing basketball and coached later in life. At Glenlawn he formed a lifelong friendship with Dave Williamson and they developed a fantasy hockey "Leeg" which they played until the time of his death. His career spanned 30+ years at CN in Winnipeg, Montreal, and six months in Australia. The highlights of his retirement life included spending winters in Arizona where he met up with another lifelong friend from Glenlawn, and winning a trip to Mexico in 2000. Prior to losing his legs to diabetes, his passions included golf, bowling, and many spectator sports. Fred was a very laid-back individual who took everything in stride. He made friends wherever he went, and was kind to everyone.
We wish to offer a sincere thank you to the wonderful caregivers and friends at River Park Gardens and Poseidon care facilities.
Cremation has taken place. Due to Covid restrictions, a private family service will be held.
Flowers are gratefully declined, however a donation can be made in Fred's memory to the Salvation Army or another charity.