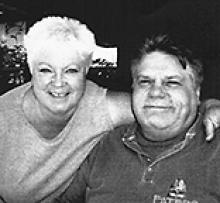 It is with profound regret that we announce the peaceful passing of Jack Bert Oja, at his home in Campbell River, BC, in his 71st year.
Jack was predeceased by his brother Bert and his parents, Dr. Bert and Evelyn. He is survived by his sisters, Sandy of Winnipeg and Pat of Campbell River as well as his niece Sandy (Matt) and nephew James and great-niece Pyper Lee. Jack grew up in Wildwood Park in Fort Garry, he went to school there attending Vincent Massey for high school. He also attended St. John's Dynevor School in Selkirk, MB. He was a voracious reader and loved antique furniture. His home is situated on Discovery Bay and he was lucky enough to see the killer whales when they swan through Georgia Straight. He enjoyed the eagles nesting nearby and watched the chicks fledge when he first moved there. Jack enjoyed cooking and barbequing and having visitors from Winnipeg. An avid gardener, Jack can be viewed in his beloved garden at Campbell River Art Gallery Garden Tour 2012. A longterm resident of Campbell River he was known in his neighbourhood as the Mayor of Willow Point. Information at Tim Hicks.ccc@gmail.com.
A Celebration of Life will be held at a later date.