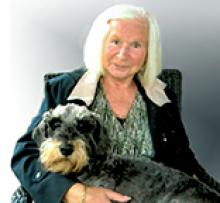 Janina a devoted mother, passed away peacefully with loved ones by her side on July 23, 2020.
Janina was born in Krakow, Poland, January 25, 1931. She immigrated to Canada in 1960 with both her late husband, Jerzy and son, Christopher. She found employment firstly at the Capital Theatre and later at the University of Manitoba until retirement.
Janina was a compassionate woman which was evident everyday by the unconditional love that she bestowed upon her loved ones, especially on her son Christopher.
Janina was passionate about her beloved pets who were considered family. Keeda, AKA The Mexican, also known as Mr. Boychuk was lovingly by her side 24/7. Teeka #2, who lived down the street with her son, came to visit every day. Teeka #1, Buffy, Sasha and precious Jacky also spent many years loving and bring joy to Baba's life. Bentley, AKA Bentley Schmentley who faithfully accompanied Baba for 10 years on many long walks, prior to Keeda.
Gardening was another passion of Janina's, both with flowers and vegetables. A familiar summer favourite snack was having freshly picked garden tomatoes, with Vidalia onions, on tasty rye bread.
Janina leaves behind son Christopher (Janet) and was predeceased by her late husbands, Jerzy Czuma and Stanley Skorupski and daughter-in-law Karen.
A heartfelt thanks to Janet Rechik who was loved like a daughter. Janet spent countless days and nights with Janina offering unconditional love and support both prior and after Janina fell ill.
Special thanks to Harry and staff from Friends Funeral Service for going above and beyond in their compassion and care to detail.
A private service was held at Friends Funeral Service, July 30, 2020 and a Mass of Christian Burial was held at Holy Ghost Church, July 31, 2020.
Pallbearers were Christopher Czuma, Janet Rechik, Wayne Ferniuk, Stan Bedernjak, Roman Slowinski and Joe Strebly. Thank you to the Pallbearer's and to the many friends and family that helped in our time of need.
Janina will be sadly missed by all that knew and loved her.

Until we meet again Mama.
May you Rest In Peace.