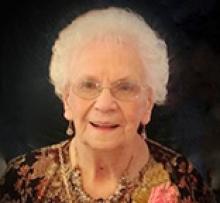 On Thursday, April 16, 2020, at Grace Hospice, Orma Jean Agar died peacefully surrounded by her family.
Orma will be greatly missed by her children, Lyle Agar and his wife Julia Macgregor, Gayle Hassett and her husband Rick and Gordon Agar. Her grandchildren, Sileas Sideroff (Kyle), Steven Hassett (Lauren), Sara Agar (Karl Langdale-Hunt) and Kevin Hassett (Whitney) will always cherish their memories of her. She was especially loved by her four great-grandchildren, Olivia, Logan, Sienna and Rhys who will miss their 'Nana O' immensely. Orma will be dearly missed by her surviving sister Helen Myer and her brother-in-law Edwin Bracken. Orma was also very close to her many cousins, nieces and nephews who will remember her fondly.
She was predeceased by her husband Wilfred on November 29, 2005, her parents, Alex and Isabel McDonald, her in-laws, Bob and Betty Agar; brother Graham McDonald and sister Marie Bracken; sisters-in-law, Edna McDonald and Phyllis Westmacott; and brothers-in-law, Mark Westmacott and Ed Myer.
Orma was born on August 24, 1925, in Selkirk, Manitoba. She spent her younger years on the family farm near Clandeboye, Manitoba, where she attended school. Orma was always involved in her community beginning with the local 4H Club and United Church youth activities. At the age of 17, she taught school in Inwood, Manitoba, as one of the permit teachers who helped keep Manitoba's rural schools open during the Second World War. She found the experience of teaching in a one-room schoolhouse both challenging and fulfilling! After teaching, she moved to Winnipeg where she attended secretarial school at Dominion Business College. She worked for Standard Dairy and, finally, Trans-Canada Airlines, now Air Canada, where she met her husband Wilfred Agar.
Wilf and Orma were married at Clandeboye United Church on November 10, 1951. Throughout her life Orma was very involved with the United Church of Canada as an active member of the Clandeboye, Harstone and McClure congregations. She was a committed and valued member of the United Church Women and enjoyed working as 'Envelope Secretary' at McClure United Church. She was always good with money and figures and was so proud to be able to count the collection up to her last months. Orma enjoyed baking up a storm for church functions. She knit hundreds of dishcloths for rummage sales and many afghans and sweaters for family and friends. She was passionate in her volunteer work collecting money through the 'Loose Change Fund' at church to buy socks, underwear and other necessities that were needed at Siloam Mission.
Orma loved visiting her family and friends. She was always up for a trip by plane, train or car to visit her many relatives and friends across Canada - from Montreal to Vancouver, throughout the UK, Europe and the USA. She also valued travelling to learn about other places and meet new people, whose stories she loved to hear. Watching curling was a favourite pastime which trumped family dinners quite often! She was also an enthusiastic Winnipeg Blue Bombers fan and knew the names of all the players and their positions. Orma wore her Milt Stegall jersey proudly as she cheered on the team. In her later years, she lived in Colorado Estates where she enjoyed the social life and strong friendships she made. Orma especially loved her Saturday and Monday night card games. She valued each of her special friends.
Orma was very active and independent right up to her final five or six months - driving her car, shopping, dining out and meeting friends until her failing health prevented her from doing so.
Thank you to Reverend Robert Campbell for performing a heartwarming and very personal Memorial for Mom in the church where she and Dad were married.
We would like to extend a special thanks to Dr. Wai-Ching Tse, all of the staff at the Grace Hospice and Orma's home care workers for their excellent care and wonderful dedication.
A private family funeral was held at Clandeboye United Church on Friday, August 7, 2020. Orma will always remain in the hearts of her many family members and friends, near and far. She will live on in the memories of the numerous people whose lives she touched. A video remembrance of Orma is available at this link: https://www.youtube.com/watch?v=hsgxD7kcUWo
In lieu of flowers, donations may be made to McClure United Church, 533 Greenwood Place, Winnipeg, MB R3G 3M1, Clandeboye United Church, P.O. Box 149, Clandeboye, MB R0C 0P0), CancerCare Manitoba or charity of your choice.

Mom, we hope you and Dad are
birdwatching and picnicking together!
We miss you both so very much.

Condolences may be left on her tribute wall at www.gilbartfuneralhome.com.