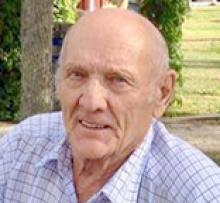 On Monday, August 3, 2020, Leo Micheal Latoski, a loving husband, father and grandfather, passed away at age 89 after a courageous battle with cancer.
Leo was born December 18, 1930 in Armstrong, Ontario to his parents, Micheal and Marie Latoski (Dupuis). In 1953, he married the love of his life, Marion Boudreau. They raised two daughters and three sons together. Leo started working for CN Rail in 1947 in Northern Ontario, like his father and sister. In 1956 he moved to Thunder Bay, Ontario. He worked at Swifts and other jobs until he returned to CN Rail around 1967. He moved to Winnipeg in 1977, where he remained with the CN Rail until his retirement in 1990.
Leo was a kind man with a true passion for helping others. He could often be seen around his East Kildonan neighbourhood shovelling their snow, cutting their lawns, sorting recycling and chatting with everyone passing by. When he moved into Concordia Village three years ago, that same genuine enthusiasm to make another's day brighter continued whether it was surprising friends with new solar lights for their balconies, eating dinner with his buddies or stopping to say hello to everyone he encountered. Leo enjoyed attending Winnipeg Beach concerts and going to the casino with friends. He also took pride in his collection of solar lights on his balcony, especially his angels as they reminded him of his wife.
Leo is survived by his children, Pam Kosola (Gary) (Thunder Bay), Brian Latoski (Ida) (Winnipeg), Lawrence Latoski (Edmonton), Dawn Champagne (Stephen) (Winnipeg), and Glen Latoski (Cindy) (Winnipeg). He is also survived by his six grandchildren and five great-grandchildren. Leo was predeceased by his wife Marion (2012), his brother Paul (1972) and sisters, Juliette Latoski (1977), Florence Verry (2004), Margaret Sorel (1991) and Yvonne Cambly (2001), along with his parents, Micheal and Marie Latoski.
Leo was a wonderful husband, father, grandfather and great-grandfather as he truly loved us all unconditionally. The world is a little less bright now without him in it. His family loves him dearly and misses him so, but we take comfort knowing that he's been reunited with his beloved 'Ducky'. They're both now free and flying with the angels, together once again. Rest in peace Mom and Dad.
We would like to thank the staff on the Palliative Care Unit (3East) at the Riverview Health Centre for their quality care, genuine kindness and true compassion they showed our father in his final days.
According to Leo's wishes, cremation has taken place with interment occurring in Thunder Bay at a later date.