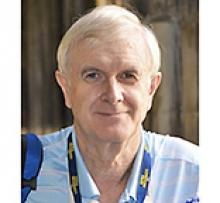 It is with deep and profound sorrow that we announce the sudden passing of William Glenn McFetridge.
At home and among his friends, Glenn will be remembered for his thoughtfulness, kind demeanour, curiosity about the world, and his uncanny ability to spill his breakfast, lunch or dinner on his t-shirt, which was often on backwards or inside out.
The North Star of his family, he loved watching his family buzz around, providing an ever-calming presence when the buzz became too busy. Always kind and patient, even when teaching his children how to drive a manual car. He was remarkably funny, often unwittingly, through his quips about life and his pronunciation of the word orange.
He had a full and adventurous life, travelled to 23 countries, across five continents, including the rainforests of Costa Rica and the beaches of Thailand. His love of travel came from his deep knowledge of history, and an almost supernatural knowledge of geography and maps.
Glenn was committed to public service, a member of the Manitoba Bar Association for over 30 years. His career with the Government of Manitoba culminated as General Counsel and Team Leader of Litigation for the Department of Justice Legal Services. Glenn was a distinguished and respected lawyer who argued at all levels of court.
At the time of his passing, he was enjoying retirement, spending time with family and his cat, Bootsie, keeping up with the news, watching Winnipeg teams, cooking, gardening, meeting with his friends for 'after work' drinks, and continuing his weekly tradition of breakfast with his long-time friend George.
Glenn is survived by his loving wife Marjorie Webb, brother Robert (Sharon) McFetridge, children, Sean and Taylor (Lane), stepdaughter Trinda Frovich (Dale), and mother-in-law Edna Webb. He also survives in the memories of his many friends and extended family.
Due to COVID, a private interment will be held at Elmwood Cemetery; a Celebration of Life will be held at a future date.
In lieu of flowers, donate to the charity of your choice or buy yourself more lightbulbs and batteries. Glenn always said you could never have enough.

Love and miss you always.