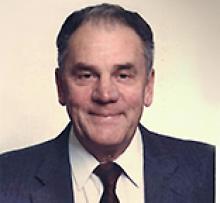 Dad was born in the dustbowl known as Herbert Saskatchewan to Abram Hiebert and Katherine Unger. He had five siblings, Marjorie, Winona, Louise, Rodney and Floyd. He is survived by his brother Floyd (Norma).
In the summer of '42, Dad met our future mother May Morden of Tyndall, on the boardwalk while she was vacationing in the big city of Steinbach. It was a classic case of love at first sight, but in those days you "couldn't get there from here" so future visits were limited, as it meant travelling through Winnipeg. After a mostly long distance relationship and letter writing campaign, they were wed in 1945.
The marriage produced six children, James (deceased at birth), Joy Buset (Donald), Heather, Garth, Bradley (Shayla), and Miles (Tammy). Over time, grandchildren began to arrive on the scene, Echo Buset (deceased), Aaron Buset (Lauren), Jennifer Labossiere (Dean), Michael Roberts (Trina), Andrea Roberts (Allen Hart), North, Mya and Michaela Hiebert. Then came six great-grandchildren, Taylor, Alex and Wyatt Roberts, Olivia Roberts-Lamirande, Mattix Hart and Leo Buset.
One of Dad's first jobs was to follow in the footsteps of his uncle as a professional driver, captaining a Greyhound bus. He loved the road, made friends wherever he went and regaled us with ripping yarns and hair-raising tales of the highway and his travelling clientele. In his prime, he spent most of his working career in the coin operated machine business, bringing the 45 RPM music of Elvis, the Beatles and other greats to the masses through his Jukeboxes, in outpost honky-tonks and cafes in every corner of the province. Many a small-town youth whiled away sultry summer afternoons playing his pinball machines and chasing the "free play". He was generous with his spare time and volunteered with the Wolf Cubs, was an elder in the Westminster United Church and a stalwart member of the bass section of the choir there for 52 years.
Mom and Dad treated us kids to summer vacations every year, renting a cabin at Toniata Beach, teaching us to relax, swim, fish, waterski, and get sunburned until they finally found a place they could call their own in 1973. We enjoyed many years there as a family; Mom and Dad enjoyed a lovely retirement there and we still find time to congregate there every year to celebrate summer.
Mom passed away peacefully in her sleep in 2015, just a couple of weeks short of their 70th wedding anniversary. Dad's health began to decline after losing the love of his life and eventually moved to the Thorvaldson Care Centre (an assisted living home) where he enjoyed the camaraderie and the great food (especially the soup). Thank you to all the staff there who were very kind, caring and accommodating.
As time wore on he became weaker and finally succumbed to a variety of ailments which he didn't have the strength to fight off, as his heart was tired and failing.
We all love him dearly and will miss him terribly until we meet again in heaven.

Dad, your earthly journey has come to an end.
Rest peacefully in the arms of God.

A funeral service will be held Tuesday, August 11 at 11:00 a.m. at Friends Funeral Chapel, 2146 Main Street in Winnipeg.
In lieu of flowers, donations may be made to the Union Gospel Mission or the Canadian Bible Society.