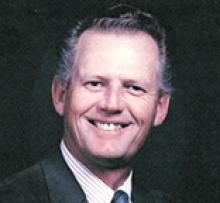 Jon Goodman was born May 1, 1938, the youngest of five children born to Bjarni and Elizabeth Goodman of Winnipeg. He passed away on May 12, 2020, after many health issues over the past few years.
He was predeceased by his parents, Bjarni and Elizabeth, his in-laws, Charlie and Sue Hardy, his brothers, Bob Goodman and Elmer Goodman, and sisters, Lillian Whiteside and Helen Petursson. He is survived and terribly missed by his wife Gail, sons, Bill and Rick, and his grandsons, Jackson, Jordan and Jacob.
Jon grew up in Winnipeg's West End, attending Principal Sparling School and Daniel McIntyre Collegiate. He then went to the University of Manitoba graduating in 1962 with a Bachelor of Chartered Accountancy. He worked at his chosen profession in Saskatoon and Winnipeg.
Sports were important to Jon both as a participant and spectator. He loved to golf and belonged to the Riverside Golf Club in Saskatoon and then at Breezy Bend Golf and Country Club where he served two consecutive terms and president of the men's league. During the winter he would enjoy curling at the Thistle Curling Rink.
Football was a favourite pastime for Jon. He served as treasurer for the Winnipeg Rods. And, for many years, he and Gail had season tickets for the Blue Bombers. While in Saskatoon and then in Winnipeg, Jon enjoyed the fellowship of the Kinsmen and K-40 clubs.
Although he didn't get to visit Iceland, Jon was very proud of his Icelandic heritage.
In lieu of flowers, the family requests that donations be made to the Winnipeg Humane Society, Diabetes Canada, or to a charity of your choice.
Due to Covid-19 restrictions, a private family interment has taken place.