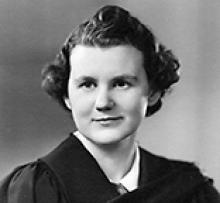 Dr. Asa MacDonell (née Kristjansson) slipped away from us on June 29, 2020 at 6:30 p.m.
Born May 5, 1918, she graduated Medicine from the University of Manitoba in 1943. That same year, she married her best friend and sweetheart, Dr. Jack A. MacDonell. Theirs was a happy and loving marriage.
She thanks her family: daughter Fina, granddaughter Arwen, and son-in-law Tim; as well as Helen Girmay, Maria Mendonça, and Dr. Karim Vellani for their care and support.
At her request there will be no funeral or memorial.
Asa was born in Winnipeg, Manitoba to Fridrik and Frida Kristjansson, Icelandic immigrants who met and married in Winnipeg. The second oldest in a family of five, Asa was very proud of her Icelandic heritage. Her first language was Icelandic but, at five, being a loquacious and curious child, she learned English by chatting with passers by over the fence in the front yard of her home.
She loved going to school, and loved her music lessons even more, becoming an excellent violinist. Asa played first desk in her high school's orchestra, and could have had a career as a professional musician. However, as her father insisted all his children would go to university and become professionals, she set her sights on becoming a doctor - inspired by her Amma who had been a midwife in Iceland.
When she entered high school, she met with resistance to her plans. The Medical School entrance requirements included physics and chemistry, and both these classes were "boys only". She successfully convinced her principal to let her take both subjects. Her chemistry teacher refused to speak to her, telling Asa's classmates that a girl wouldn't be able to understand the work, and asking daily, "Is she still here?" Needless to say she did very well in both classes.
With her exceptional marks, Asa had no problem being accepted into the Faculty of Medicine at the University of Manitoba, at a time when only four women a year were allowed entrance. The Second World War was raging, and Asa, like most of her classmates, enlisted in the Canadian Army while still studying. She and Jack married the day after graduation (her father wanted the Kristjansson name on her diploma); and they both went into active service shortly after. Following the War, Asa and Jack spent a year in London, England to secure their Specialist papers. They visited friends in Belgium and Holland, and toured around Norway and Scotland. To pay the bills, they worked screening refugees applying to immigrate to Canada.
After spending a few years working as an allergy specialist, Asa decided to move into Administration. In the early 1960s she was hired as the Assistant Administrator at the Department of Veterans' Affairs - Deer Lodge Hospital in Winnipeg. A few years later, she applied for the job of the Administrator. She was the first woman to run a DVA hospital. She proved to be an excellent administrator: thorough, innovative, and always available to her staff. One of the highlights of her time at Deer Lodge was a visit from the Queen. As Asa and Queen Elizabeth walked the grounds, greeting patients, they talked about the difficulties of being a woman in charge with one's husband "on staff" so to speak. Asa was instrumental in the creation of the Geriatric Day Hospital at Deer Lodge – one of the many programs created for the elderly by her husband, Jack. She was immensely proud when he was awarded the Order of Canada for his ground-breaking work in geriatrics. They were the original "power couple".
In 1985, Asa and Jack retired to Victoria, enjoying the clement weather, playing bridge, and rounds of golf at the beautiful Victoria Golf Club. They remained very active; continuing to travel far and wide, collecting art and antiques along the way. In 2001, they moved to Toronto to be closer to their family. They attended the symphony, the opera, and many, many plays. Asa also loved action movies and a good murder mystery; and she was in her element chatting politics or news of the day with her family over a glass of wine (aka 'giggle juice'), or a gin and soda. Whip-smart till the end, not much ever got past her. Anyone who met her, however casually, never forgot her. Her courage, tenacity, intelligence, humour, generosity, and love will be with us forever.
Asa slipped away peacefully at home, in her own bed, surrounded by her loving family. She is survived by her daughter Fina (Tim), her beloved granddaughter Arwen, and her nephews and nieces: Steini Brown (Erica), Patricia Parkhill, Rik Parkhill (Susan), Rik Kristjansson (Sally), Richard Stonyk (Karen), David Gerry (Grace), Pat Turner (Bill), and Bill Gerry (Joanne).
She is sharply missed.