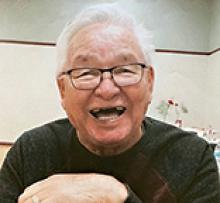 
Social distancing must be respected and we ask all those who attend to bring their own lawn chairs. Masks will be provided if needed.
Honorary pallbearers are Doug McLeod, Dennis Orvis, Erwin McLeod, Trevor Osnach, Ryan Hudson, Andrew Mowat and JR (Alfred) Anderson.
A private family interment will take place at a later date.
In lieu of flowers, donations can be sent to the Gimli Adult Day Program c/o Interlake-Eastern Health Foundation, Box 5000, 120 Easton Drive, Selkirk, MB R1A 2M2. Please ensure you note the Gimli Adult Day Program on the donation.