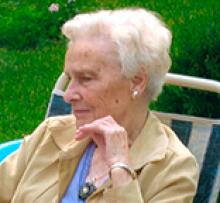 On Friday, August 7, 2020, Edith Mackie (née Ross) of Winnipeg passed into the presence of her Lord after a brief illness.
Edith was born and raised in Bonnyville, AB. She later moved to Calgary and then Banff, where she met Alex. They were married in 1943, just before Alex went overseas. After the war and Alex's return, they lived in Winnipeg until 1950 when they moved to Dryden. In 1957 they moved to the Oxdrift area where they raised their family and spent many happy years together. After Alex's passing in 1998, Edith moved to Winnipeg in 2001 where she enjoyed being able to spend time frequently with family and get to know her grandchildren as adults.
Edith was predeceased by all of her siblings. She is survived by her four children, nine grandchildren, and eight great-grandchildren: Norah Turgeon (Ed), Ted (Trysh) and Cynthia, Lynne Alexiuk (Len), Mark (Tressa) and family, Jonathan, Susan, and Katherine (Dave) and family, Dan Mackie (Ellen) and family, and Evelyn Mackie. A beloved mother and grandmother, she is also survived by many nieces and nephews who cherish her memory.