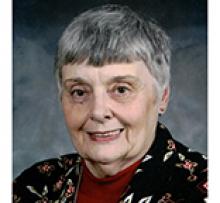 Martha Florence Houston passed away peacefully at Middlechurch Home on Sunday, August 9, 2020. She was born in Winnipeg on October 6, 1937.
She will be missed by her children, Heather McIsaac (Tim), James (Tanice), Rob (Carol), and grandchildren, Stephen, Candace, Carrie, and extended grandchildren, Irene and Hiroku.
She was predeceased by her husband Rob in 1989; parents, Hazel and Graham Travers; and brother Sam Travers.
Born and raised in Winnipeg, she attended Balmoral Hall and graduated as an LPN. She spent many years working as a nurse and later, in the market research field.
She enjoyed working with youth and was actively involved with the Scouts Canada organization, and through the Masonic family, Job's Daughters. Martha was a proud member of Friendship Chapter OES and Sphinx Temple DON.
A memorial gathering of family and friends will be held at a later date.
In lieu of flowers, donations may be made to the Masonic Foundation of Manitoba Inc., 420 Corydon Avenue, Winnipeg, MB R3L 0N8.