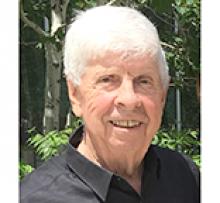 Peacefully on Sunday August 9, 2020, Earl "Sam" Thomas Doherty, 85 years, passed away at the Maples Personal Care Home.
Sam is survived by his loving wife Joyce of 60 years; daughters, Shannon (Randy) Bakke of Bismarck, ND; Heather (Randy) Koniuk of Mill Bay, BC; and Pamela (Mike) Namaka of East St. Paul, MB; grandchildren, Grant and Caitlin Bakke; Madison and Alyssa Koniuk; Zachary, Connor and Laine Kolton, Brock, Treye and Eden Namaka; and nieces and nephews.
He was predeceased by his parents and only brother, Alvin Doyle.
Sam was born December 28, 1934 in Souris, MB. He graduated from the Neepawa High School, attended the University of Manitoba, graduating with a Bachelor of Science in Pharmacy in 1959.
Sam met the love of his life, Joyce Harvey, after a baseball game in Oakbank, MB and married three years later May 28, 1960.
Sam loved his pharmacy career of over 50 years, retiring in 2015. He spent his career in retail pharmacy beginning with Metro Drugs, and later working for various drug chains, including locums to Churchill and Rankin Inlet. He also served a term as President for Manitoba Society of Professional Pharmacists.
Sam enjoyed all sports. He played baseball for the Neepawa Cubs from 1953 - 1960. The Cubs would later be inducted into the Manitoba Baseball Hall of Fame in 2007. He also enjoyed curling for many years. The highlight of his curling career was representing Manitoba and winning the Canadian Senior Men's Championship in 1987. This curling team was inducted into the Manitoba Curling Hall of Fame in 2018. Sam loved to cheer on his grandchildren and attended many hockey, soccer, curling, tennis and baseball games.
Sam was a kind, cheerful, devoted man, that could tell a story like no other. His smile and laughter will be missed by all who knew and loved him.
Service will be held at the Oakbank United Church on Thursday, August 20, 2020. In compliance with Covid-19 restrictions, regrettably attendance is limited to invitation only.
In lieu of flowers, donations may be made to the Manitoba Cancer Care Foundation.

Friends and family may share memories by visiting Sam's memorial page at seasonsfunerals.ca