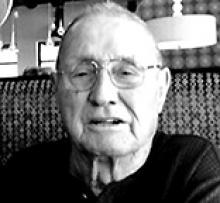 Donald (Don) Alexander Muir Gray passed peacefully on August 7, 2020 in Winnipeg at the age of 93 years.
He is survived by his wife Anne (Skura); his children, Robert (Sharleen), Kathie Partridge (Kevin) and Bruce (Vanessa Arrojado); his grandchildren, Collin Partridge (Wynne), Leanne Lutomsky (Justin), Amy-Leigh, Geoffrey (Chelsea), Hannah, Emma and Nicholas; his great-grandchildren, Caden, Amara and Kiera; his sister Maisie Benson (Oliver) and brother David. He was predeceased by his parents, Henry and Isabella; as well as his sister Nancy and brother Harry.
Don was born on December 14, 1926 in Laurier, Manitoba. From a young age, he helped his family and neighbours on their farms, and one of his childhood memories involved stooking wheat sheaves behind a threshing machine on hot summer days. When Don was 18, he moved to Winnipeg, Manitoba where he started his career as an electrician. During those early years, he developed a sense of responsibility, strong work ethic, and determination which served him well throughout his life.
While at a social gathering in Winnipeg, Don met Anne and soon fell in love. They were married on July 25, 1959, created a beautiful family, and were blessed with 61 years of marriage because of their love and commitment to each other. Don's life was enriched by Anne's unwavering kindness, support and compassion.
In 1964, they moved to Treherne, Manitoba where they started an electrical business which served the surrounding area for almost 30 years. People they met in Treherne became great friends with whom they shared many happy times. Don retired in 1993, which he enjoyed by golfing around Manitoba with Anne and friends, gardening, and watching sports. In 2011, Don and Anne moved back to Winnipeg where they often visited new and old friends, and spent more quality time with their children, grandchildren and great-grandchildren. Throughout most of his life, Don actively contributed time and effort to a number of organizations, including the Treherne Village Council, Tiger Hills Health District Board, Kinsmen Club, Delahunt Golf and Country Club, and Treherne Curling Club. He also contributed countless hours as a dedicated volunteer Cub Scout leader, fire fighter, and paramedic, while also helping to establish the Tiger Mountain Pool.
Don's children, grandchildren and great-grandchildren were a light in his life. They loved his witty banter and his philosophy that, tomorrow is always a new day, regardless of what happened the day before. His grandchildren enjoyed golfing, golf cart rides, tractor rides at local farms, helping to garden and learning about life in the country with Grandpa. They were lovingly spoiled by him with an occasional treat like ice cream or home-made potato fries.
Don will always be remembered for his quick mind, being positive and calm even when things were tough, and for generously helping others. He was reserved in how he expressed his feelings, but those closest to him always knew that, through his actions, he was a loyal and loving friend, husband, parent, grandfather and great-grandfather.
Due to the current Covid-19 circumstances, the family will be holding a private family service with interment at Glen Lawn Memorial Gardens.
In lieu of flowers, Don's family requests that you consider a donation to Siloam Mission, the Canadian Diabetes Association or a charity of your choice.


Family and friends may sign a book of
condolence at www.glenlawn.ca