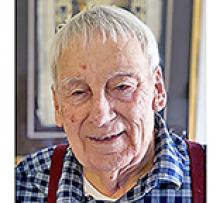 Bill passed away peacefully in his sleep at Selkirk Regional Health Centre, after a brief illness, at the age of 91 years young.
He was born in Hafford, SK to Matthew (Mike) and Mary Kotelko. Bill graduated from teacher training at Saskatoon Normal School in 1945 and taught his first year in a one-room school (Sand Lake) south of Blaine Lake, Saskatchewan, with 34 students from grades one to ten. While visiting his parents who had moved to Warren in July 1947, he was offered a teaching position at Woodlands, where he taught grades five to eight for four years. In 1951 he was hired at Warren to teach grades six, seven and eight until 1958, when he taught one year of high school. He was appointed principal of Warren Elementary School in 1959 and held that position until he retired in 1986.
Bill married Pat Rodway on June 11, 1955 and they lived in Warren, where they raised two sons and a daughter. Bill and Pat enjoyed 28 winters in Mesa, AZ after his retirement, where they made many friends. They moved to Lion's Manor in Stonewall in 2013. Bill was proud to be a charter member of the Warren and District Lion's Club.
Bill is predeceased by his parents, Mike and Mary, sister Joan, and son Neil, and is survived by his wife Pat, son Perry, daughter Yvonne (Ron), six grandchildren, one great-grandchild, sister Phyllis Crockatt and many cousins, nieces and nephews.
Cremation has taken place and a private family ceremony will be conducted at a later date.
In lieu of flowers, donations can be made to CancerCare Manitoba if so desired.