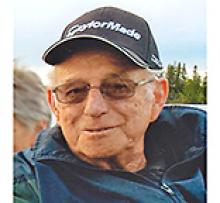 It is with profound sadness and heavy hearts the family announces the passing of Armand Berard on August 12, 2020, at the age of 89 years.
His memory will be forever cherished by his loving wife of 65 years, Shirley, his two daughters, Irene (Roger) Druwe, Joanne (Marcel) Pelletier, and two grandsons, Jeff (Jenn) Fennell and Dean (Lindsey) Fennell. He also leaves to mourn his sister-in-law Yvonne Berard and brother-in-law Leo Renaud.
He was predeceased by his parents, Gib and Elizabeth Berard, sisters, Cecile (Ernest) Mistlebacher, Camille Renaud, Lorraine, and brothers, Pat and Denis.
Armand was born and raised in Ste. Anne, Manitoba. In 1951 Armand and Shirley met and were married in 1954. They lived all of their married life in the RM of Springfield. Armand worked for the CNR as a carman for 33 years. Aside from work he enjoyed raising Charolais cattle on his farm. He loved his farm life but his greatest love was his family. His pride and joy were his two girls and then he was blessed with two grandsons. The boys soon became his whole life. He would spend hours with them in the work shop teaching them his skills in mechanics. He was so very proud of them and their success in life and their chosen trade. Nothing was too much to ask of Armand. He was always ready to help - be it work or advice.
Armand will be forever missed and mourned. He leaves us with beautiful memories and the realization how very fortunate we were able to have him as our husband, father and grandfather. Love you forever.
As per Armand's wishes there will no service.
Friends and family may share memories by visiting Armand's memorial page at seasonsfunerals.ca