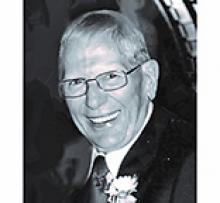 It is with great love and sadness that we announce the peaceful passing of our beloved father, grandfather, and great-grandfather Henry Ryzebol, on August 11, 2020.
He will forever be remembered by his beloved wife of 62 years Teena, his children Melanie (Doug), Kevin (Lisa), Brenda (Tim), grandchildren Ashley, Michael (Alissa), Kyle, Kaylie (Chris), Katelynn (Bobby), Kristen (Mat), Cody, Taylor, Jordan, great-grandchildren, Maisey, Maclyn, Ella, Brooklynn, Haytham, Blake, Hunter, and Hendrix. His siblings, Ina, John (Rita), Margaret, Peter (Ann), Nettie (Don), brother in-law Max, as well as many nieces and nephews. He is predeceased by his parents, Henry and Greta, his siblings, Aafka, Alice, and Brant, granddaughter Jasmine, and three nephews and two nieces and his brothers-in-law and sisters-in-law.
Henry was born in Abbey, Saskatchewan on May 11, 1935. And in 1947 moved with his family to the farm in Manitoba, where he soon gained a passion for motorized equipment as he began learning to drive trucks.
In 1951, Dad met the love of his life Teena at the Newton Avenue CRC, whom he later married on May 17, 1958 in Thunder Bay, Ontario. Throughout his time there he held a variety of jobs such as driving school buses, delivering milk, and working in the bush camps during the winter months. His father in-law even taught him the trade of being a bricklayer and carpenter for a short while, before he made his way back to Manitoba and driving truck which he retired from in 2000. Upon entering retirement life, Dad kept his days busy by becoming an active volunteer in the community of Oakbank, being a member of the Beautification Committee, working as a volunteer coordinator at Kin Place, and joining the Citizens on Patrol. After experiencing some mobility issues and wearing out a set of tires, Dad parked his bike and purchased a scooter so that the touring of the town could continue for years to come. He also enjoyed attending any activity his grandchildren and great-grandchildren were involved in. His strong faith and his love for his family was displayed daily to everyone. He was a longtime faithful member of the Transcona CRC.
Our heartfelt thanks go to the staff at HSC, GH4 for all their compassion and support in Dad's last few days.
Due to COVID-19 a family funeral will be held, but will be live-streamed on: August 21, 2020 at 11:00 a.m. at www.transconacrc.ca

In lieu of flowers a donation can be made in Henry's honour to Hope Centre, 83 Henderson Highway Winnipeg, MB R2L 1L2