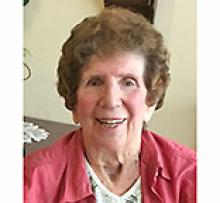 Kathleen passed away peacefully at the Portage District General Hospital on August 12, 2020. Kathleen was predeceased by Leonard Quinlan (husband), James Tanner (father), Mary Tanner (mother) and Lorne Tanner (brother).
Kathleen was raised in Brunkild, Manitoba. After graduating high school, she moved to Winnipeg and while taking business courses resided at the Winnipeg YWCA where she made many lasting friendships. Kathleen started working at the Winnipeg Clinic, where she was employed for 25 years. She married Len in 1973 and in 1974, they moved to Portage la Prairie. Kathleen worked at CFB Portage in Administration and when the base closed, she retired. After retiring, Kathleen did some volunteer work, especially with the MS Society of Manitoba and the Manitoba Metis Federation which she continued to do while in Lions Prairie Manor. Kathleen loved to travel and when she married Len they would go to country music festivals and to Len's military reunions and renew their many acquaintances. Kathleen will be greatly missed by the Tanner, Frantz and Lake families as well as her many friends. Rest in peace Kathleen.

In lieu of flowers, donations can be made in Kathleen's memory to the Multiple Sclerosis Society of Manitoba, 1465 Buffalo Place, Winnipeg, MB R3T 1L8 or The Canadian Cancer Society, 193 Sherbrook St., Winnipeg, MB R3C 2B7.

A Graveside Service will be held on Friday, August 21at 1:00 p.m. at Hillside Cemetery with Wilma Shirriff officiating.

Messages of condolences can be made online at www.omegafuneralhome.com.

Omega Funeral Home in charge of arrangements. Make a donation to