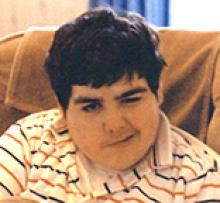 Suddenly, after a brief illness, John Christian (Chris) Badertscher died August 15, 2020, with family at his side. He was 58.
The arc of Chris' extraordinary life was shaped by a brain tumour, which sparked his precocious development as a child. Surgery at the age of two left him affected by permanent brain damage and prone to epileptic seizures. Still, just one day after that operation, Chris the toddler was standing in his hospital bed, reading out loud a story book he had memorized.
Chris was raised by parents who rejected the consensus that so-called special needs people have nothing to offer society and should be hidden away in institutions. Yes, Chris had needs, as everyone does. And he certainly was special. Chris left an impression on everyone he met, from his family and friends, to the people he lived with, to the caregivers and medical professionals who looked after him, to colleagues and the driver who took him to Imaginability, where he worked for more than 30 years.
Chris taught everyone about life. He taught us to love language. He had a compulsion to read aloud every word that passed in front of his eyes, from the boxcars on a passing train, to the weekly TV guide. That love of language informed a wicked sense of humour. Televangelists were named "The Revenue…" not "The Reverend..." If he liked you, he might give you a nickname that included a play on words. And if you got a nickname, that meant a lot.
His remarkable ability to read extended to people - Chris knew who the good ones were. At the same time, he was accepting of others and himself. "I have a fat tummy," he would say in his later years, "and that's OK."
Chris had a direct personality. He had his routines - he knew what was supposed to be on TV at what time, and could get upset when those routines were disrupted. But in his heart, Chris was an optimist. He was always looking ahead to "Janawary," when all the good things he wanted to happen would happen.
Chris leaves behind his mother, Patricia Walker; father, John Badertscher (Lynn Stevens); sister, Elisabeth Woolner (Derek); and brother, Paul (Tania Costanzo); as well as nieces and nephews across the country. He was predeceased by stepfather, Peter Walker. Chris also leaves behind housemates and friends from the community home run by St. Amant, where he lived for his last three years.
He will be laid to rest in the cemetery of St. Andrews on the Red.
In lieu of flowers, Chris' family asks that donations be made to the St. Amant Foundation, stamant.ca/donate.