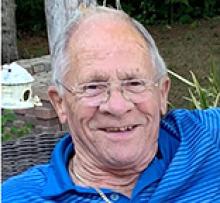 
It is with heavy hearts that we announce the sudden passing of Denis Alary of La Salle, MB, on August 13, 2020, at the age of 80 years.
Denis leaves behind to mourn his loving wife of 58 years, Pauline. Also left to grieve are his son, Raymond; daughter, Janice Bellisle along with son-in-law, Mike, and grandchildren, Wyatt, Abbey and Kyla. He is survived by his sister, Mariette Thompson (Al); brother, Gerry (Ginette); sister-in-law, Glenda Alary; brother-in-law and sister-in-law, Robert and Loraine Lavallee; sister-in-law, Gail Lavallee; and sister-in-law, Linda Lavallee; as well as numerous cousins, nieces, nephews, and many cherished friends.
Denis was born in La Salle, MB on November 12, 1939. In 1962, Denis married the love of his life, Pauline. In 1965, they welcomed a son, Raymond, and in 1970, they welcomed a daughter, Janice. After living in Winnipeg and Point-du-Bois, they finally settled in La Salle in 1974, where they continued to live until the time of his passing. Denis had several careers over his early working life, and he spent many years with Manitoba Government Trades until his retirement in 1997.
Denis was a patient, fun-loving man, with a keen sense of humour. Denis truly loved and enjoyed life, making the very most of every day. Denis was always active, often seen riding his bike around La Salle in the warmer months, or walking around home or the cabin regardless the weather. Denis loved golf, and he spent every available opportunity golfing with his best friends and family. He and Pauline travelled for many years in winter to Phoenix, to soak up the sun and golf. They also travelled to Mexico for many years, always enjoying family and friends. They enjoyed a Caribbean cruise in 2018. Denis enjoyed almost 45 years at the family cabin at Lester Beach, leaving us with enough cherished memories to last a lifetime.
Denis loved his family unconditionally, and he was always there to help with any projects we tackled. Regardless what we were doing, you could count on two things – Denis was either there helping you directly, or he was going to show up at some point to check on how you were making out on the project, just to make sure you were doing it right. He adored his wife, Pauline, doting over her even when he was in his wheelchair the past little while. He was an incredibly patient and loving father to Raymond and Janice. He never said much about personal choices, but when he said something, you listened.
Denis was a tremendous Pepere to Wyatt, Abbey and Kyla – always there for them at sporting events, dance recitals, and school events. He was up for whatever they had cooked up with him often dressing him up in a silly outfit or styling his hair – he just loved being with them, taking goofy selfies with and for them, was so fiercely proud of his grandchildren, and always told them he loved them. Mere words cannot express how much we loved Denis, and the hole in our lives from his passing is immense. A man of short stature, but a giant in every way to his family and friends.
Our sincere thank you to the doctors and nurses at the Health Sciences Centre SICU unit.
Due to Covid-19 restrictions, a family Mass and funeral will take place at a yet to be determined date in La Salle. As per Denis' wishes, cremation has taken place with E.J. Coutu & Co.
In lieu of flowers, donations can be made in Denis' memory to the Manitoba Heart & Stroke Foundation.